Home Djibouti Djibouti: The Leaders of the United States and Djibouti's Statements 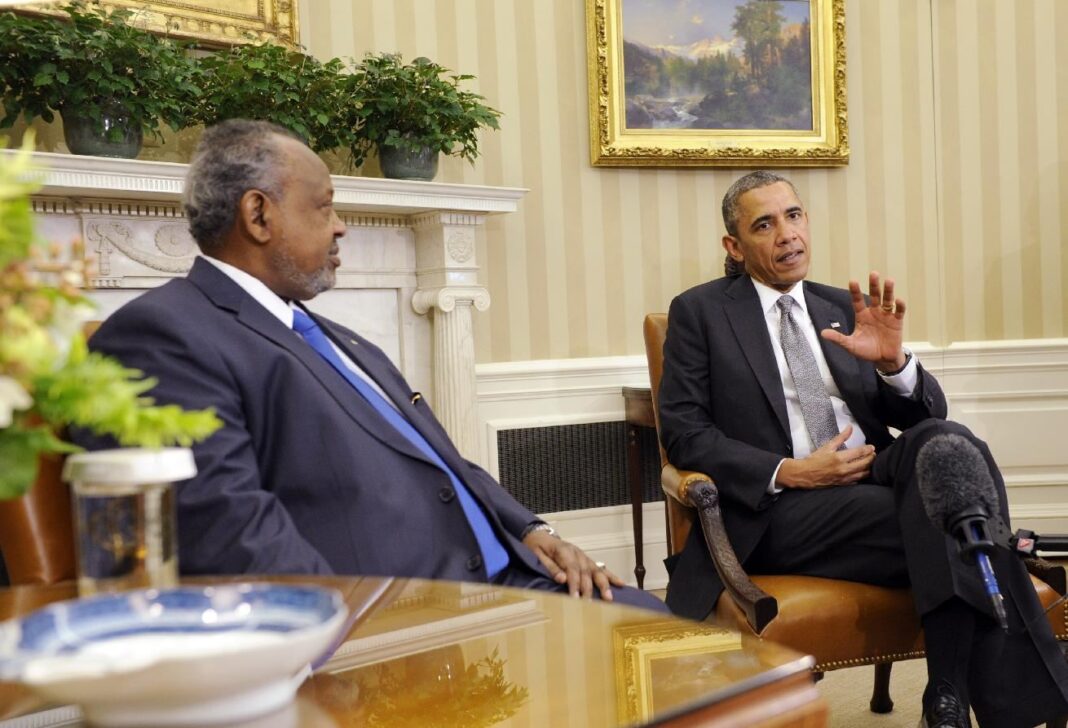 Djibouti (HAN) May 5, 2014:  The White House, President Obama and Djibouti  President Ismail Omar Guelleh pledged to work closely together to advance their shared vision for a secure, stable, and prosperous Horn of Africa and to strengthen and deepen the strategic partnership between our two countries.

To help grow Djibouti’s economy and assist Djibouti in achieving these goals, the United States pledged to increase technical and financial assistance to the Djiboutian people and to invest in Djibouti’s development priorities.  President Obama pledged to expand U.S.-sponsored workforce education and training to help strengthen Djibouti’s workforce and set a foundation for expanded employment and private sector investment.

President Obama also reaffirmed his strong commitment to expanding reliable access to electricity in Africa.  Given Djibouti’s electricity needs and to enhance its role as a regional commercial hub, the United States plans to provide technical assistance to support Djibouti’s energy sector.  The leaders identified areas for future cooperation on energy, including through the East African Geothermal Partnership.  The United States plans to help build the Government of Djibouti’s technical and institutional capacity to leverage greater private sector investment across the energy sector, including working together to catalyze private financing to develop renewable energy in Djibouti.

President Obama congratulated President Guelleh on Djibouti’s committed participation and leadership in regional bodies, including as host to and co-founder of the Intergovernmental Authority on Development (IGAD).  President Obama noted his strong support for President Guelleh’s leadership in the Horn of Africa and welcomed his plans for infrastructure development and economic integration across an increasingly vital region.  The two leaders shared their assessments of the pivotal role economic development and democratic governance can play in Djibouti’s future, including in advancing economic and development goals.

President Obama recognized President Guelleh for his commitment to empowering women and girls and promoting increased access to education and health services.  President Obama congratulated President Guelleh on the Djiboutian youth who have been selected to represent Djibouti as participants in the Young African Leaders Initiative.  The leaders emphasized the importance of supporting young entrepreneurs, encouraging youth to engage in public service and invest in the next generation of African leaders.

The Presidents also discussed ways that the U.S. presence at Camp Lemonnier can help further expand economic opportunity for the Djiboutian people, including through the Administration’s work with the U.S. Congress on proposed “Djibouti First” legislation that would that would give preference to Djiboutian products and services in Department of Defense procurements in support of U.S. requirements in Djibouti.  In doing so, the United States seeks to promote stability and economic development beneficial to both countries and to demonstrate our long term commitment to Djibouti’s long term economic growth.

Defense, Security and Regional Counterterrorism Cooperation
The two leaders discussed their shared commitment to increase security and stability in the Horn of Africa and to prevent al-Qa’ida and al-Shabaab from gaining new footholds.  President Obama and President Guelleh discussed ongoing civilian and military cooperation in the areas of countering terrorism and violent extremism, countering piracy, enhancing maritime security, and securing Djibouti’s borders.  They recognized the important role that U.S.-Djibouti cooperation plays in achieving these goals, and reaffirmed that our shared security priorities remain a central component of our relationship.

The Presidents noted Camp Lemonnier’s critical role as an operational headquarters for regional security and the importance the base plays in protecting Americans and Djiboutians alike from violent extremist individuals and organizations.  President Obama thanked President Guelleh for helping ensure the safety and security of U.S. personnel in Djibouti.

President Obama announced the United States’ intention to provide enhanced security assistance and equipment to Djiboutian security forces to advance these shared regional security and counterterrorism goals, including by providing materiel and assistance to Djiboutian forces deploying to the African Union Mission in Somalia (AMISOM).  The leaders also plan to expand liaison relationships as a critical way to deepen our partnership.

Shared Efforts in Somalia
The Presidents noted that transnational challenges in the Horn of Africa cannot be met by any one country alone.  President Obama commended Djibouti’s important contributions to peace and security in Somalia,  including through its participation in AMISOM operations aimed at defeating al-Shabaab and by organizing a number of reconciliation conferences in support of peacemaking efforts.  Djibouti has also strongly and consistently supported multinational efforts to counter piracy off the coast of Somalia.

President Guelleh noted that Djibouti’s efforts as part of AMISOM have helped provide Somalis with their best chance to achieve security, stability and peace in more than two decades.  The two leaders discussed Djibouti’s experience as a troop-contributing country to AMISOM.  The Presidents highlighted the need to support renewed efforts by AMISOM and the Somali National Army to defeat al-Shabaab and to help bring security and stability to Somalia.  This commitment has not been without burden and cost.  President Obama praised the brave service of Djiboutian soldiers in Somalia and recognized the sacrifices members of the Djiboutian Armed Forces and their families have made to help bring peace to Somalia.

A Long-Term Strategic Partnership
President Obama and President Guelleh concluded their meeting by reaffirming their shared commitment to the special and longstanding relationship between the United States and the Republic of Djibouti.  The leaders pledged to continue to work to strengthen our strategic partnership and contribute to a more secure world.  To carry this important dialogue forward, they intend to establish a U.S.-Djibouti Binational Forum and to designate senior officials to lead the implementation of the commitments made today in the spirit of building a vibrant 21stCentury Strategic Partnership grounded in friendship, mutual trust, and common security.