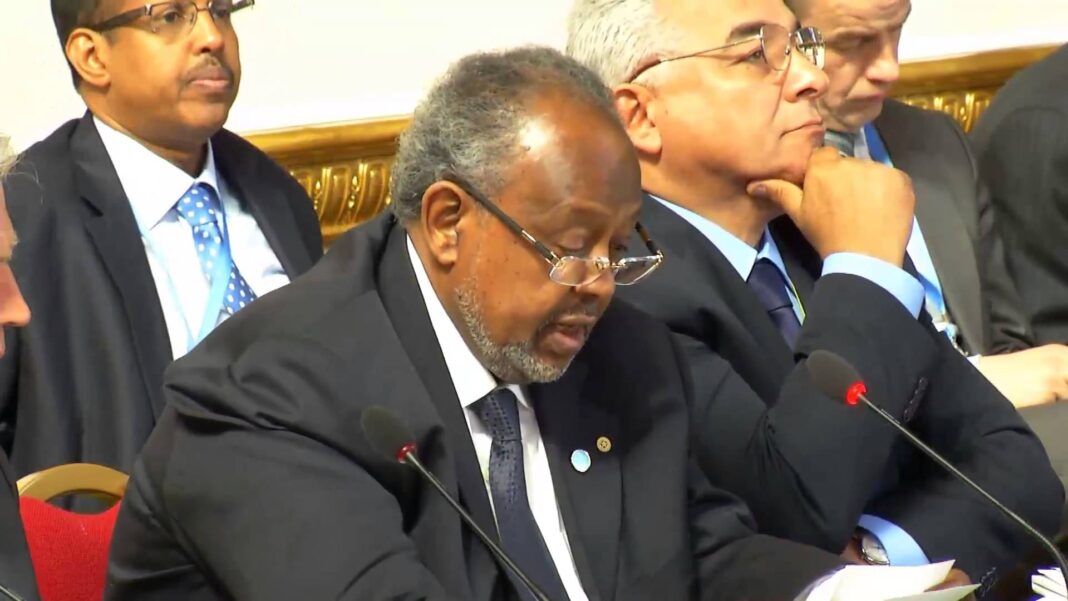 Djibouti (HAN) May 19, 2015 – Public Diplomacy and Regional Security News. By Karim Lebhour. Ismail Omar Guelleh said the war in Yemen, on the other side of a narrow sea channel from the Horn of African nation of Djibouti, was stoking dangerous rivalries between Shiite and Sunni Muslims, bolstering Al-Qaeda’s franchise in the country and posing wider risks for the region.

Guelleh also warned the violence could allow the Yemen-based Al-Qaeda in the Arabian Peninsula (AQAP) franchise to expand its power and control.

-Djibouti’s president has warned Yemen’s civil war and a resurgent Al-Qaeda pose a threat to the Middle East, but pledged continuing support to refugees fleeing the conflict, he told AFP in an interview.

AQAP “is taking advantage of these renewed tensions between Sunnis and Shiites… this may create a big gap between Yemeni people, who had never felt the difference between the two communities,” Guelleh said in an interview at the presidential palace in Djibouti.

In late March, a Saudi-led coalition began air strikes against Shiite Huthi rebels, after the insurgents, who are backed by ex-soldiers loyal to former president Ali Abdullah Saleh, seized control of large parts of Yemen.

Guelleh said the Saudi-led military action was necessary, but worried the war would split communities, with Shiites becoming a target for both Saudi airstrikes and Al-Qaeda’s Sunni extremists.

The fighting in Yemen has already sent thousands fleeing across the sea to Djibouti, with many more expected.

“Our borders remain open, they have always been,” said Guelleh, president since 1999 of the strategic former French colony, whose port guards the entrance to the Red Sea and Suez Canal.

At its narrowest point, there are only some 30 kilometres (20 miles) between Djibouti and Yemen, across the Bab al-Mandeb strait, the key shipping channel that separates Africa from Arabia.

Djibouti’s government aid agency and the UN refugee agency are preparing for some 15,000 Yemenis to arrive by boat in the coming months, making the dangerous crossing across the Gulf of Aden.

Djibouti is already stretched with the refugees it hosts: the tiny nation of 850,000 has taken in some 28,000 refugees, mainly from Somalia.

“This is the third flood of refugees from Yemen after 1986 and 1994, we are used to it,” said Guelleh, pointing out that the two neighbours shared close cultural ties and long-standing trade links.

It has sent troops to join the African Union force fighting Al-Qaeda-affiliated Shebab insurgents in neighbouring Somalia. Last year, Shebab retaliated with the first-ever suicide bombing on Djiboutian soil, targeting a restaurant in the capital popular with foreigners.

Home to the main port used by neighbouring landlocked Ethiopia, Djibouti is situated on one of the world’s busiest shipping lanes and also hosts several foreign military bases, including from the United States, France and Japan.

Guelleh does not exclude allowing China to set up a military base too, raising the prospect of the US and China having neighbouring facilities in the tiny nation.

“The biggest trade ships of this decade will be Chinese. China therefore needs to protect their interests and they are welcome,” Guelleh said of China’s interest in establishing a military toehold in Djibouti.

Djibouti is already home to the only permanent US base in Africa, Camp Lemonnier, which is used for covert, anti-terror and other operations in Yemen, Somalia and elsewhere.

“Africa is on the rise… our position must be used for regional integration in Africa,” said Guelleh.

“We cannot claim a strong economy without infrastructure,” he added, saying a new railway line would be opened this year between Djibouti and the Ethiopian capital Addis Ababa.

He said he dreamt of the link one day being extended across the continent to Dakar, capital of the west African nation of Senegal.

Despite being in power for 16 years already, the 67-year old president did not rule out running for a fourth term in elections due next year.

“I have not yet taken a decision,” he said.