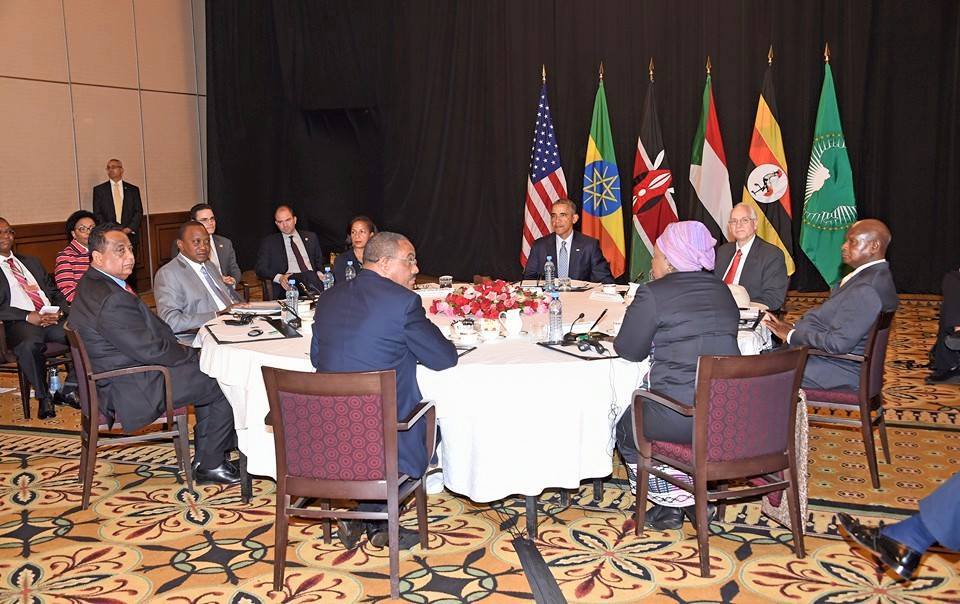 Djibouti (HAN) July 29, 2015 – Public Diplomacy and Regional Security Initiative News – In Addis Ababa, Ethiopia for a multilateral summit on the South Sudan peace process and regional counterterrorism measures. This summit is a consultation on how to make progress in the vexing subject.

“Somalia sent an official letter to the state department, US embassy in Nairobi and Addis Ababa to meet President Obama, but have been given negative diplomatic response to discuss Al-Shabaab threats in Somalia,” said Somali diplomat in Nairobi.

President Obama’s visit to Kenya and Ethiopia has been dogged with controversy as editorials in leading US newspapers, statements from human rights organisations and Somali diaspora communities based in US have been highly critical of the trip in nairobi and Addis Ababa, without inviting Somali president or Somali Prime minister to discuss Al-Shabaab Threats in Somalia.

“Terrorist groups like al-Shabab offer nothing but death and destruction” President Obama: “

Ethiopian Prime Minister Hailemariam Desalegn and Uhuru have led security talks on restoring peace in South Sudan under the auspices of the Inter-Governmental Authority on Development (IGAD), without Djibouti and Somalia leaders.

Obama in Ethiopia Talks on trade, terrorism and human rights: “Terrorist groups like al-Shabaab offer nothing but death and destruction” President Obama: “
Sources: Obama’s programme on Africa may be in jeopardy according to the reports coming from the US with a congressional battle over one of the main financial sources of the program, the US EXIM-Bank jeopardizing its future.