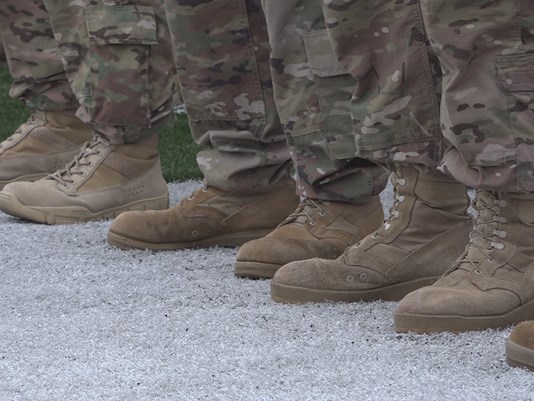 MALVERN.  The New Year brings new beginnings for hundreds of local soldiers in Arkansas. The 1st Battalion of the Arkansas National Guard is on its way to Djibouti and other troubled spots in the Horn of Africa.

Soldiers and their families gathered for ceremonies in six different locations across the state on Sunday. Those headquartered in Malvern were excited to share the last moments with their supporters before departing. Victoria Eckert, Battalion Public Affairs Specialist, said she enjoys the flexibility of the National Guard.

“It’s going to prepare me for my civilian career and that’s the awesome thing about the National Guard,” Eckert said. “We are able to do both sides, the civilian side and the army side. They work together.”

Guardsmen are offered the opportunity to serve, while also living a somewhat normal life. Eckert is a full time college student studying Public Relations. She’s excited to see how the experience will shape her life.

“I feel like I’m reaching my peek in my military career especially at [such a] young age,” said Kagdren Wiggins. “Hopefully I can do my 20 years and get out.”

For Wiggins, his hope is to pursue a career in the military. He’s nervous about traveling out of the country for the first time, but he’s ready to spread his wings.

“I have never been to the Horn of Africa before. Actually, I never really have been out of the state of Arkansas before,” he said.

For Wiggins and other first timers, that’s quickly about to change as they head to Africa. The Arkansas Guardsmen will head to Fort Bliss in Texas first before leaving the United States to support programs under the U.S. Africa Command.