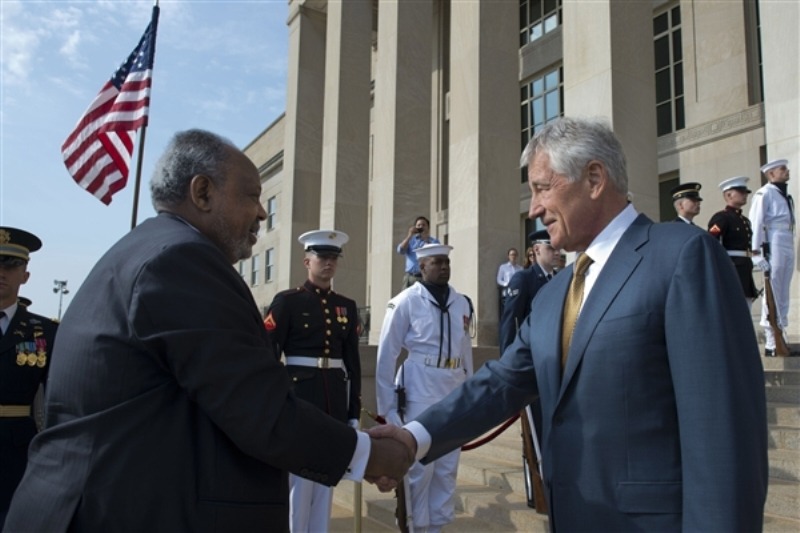 Djibouti (HAN) May 11, 2014 – HAN & Geeska Afrika Online’s weekly security reporter in Djibouti. chairman of the Joint Chiefs of Staff, met at the Pentagon last week  with Ismail Omar Gueleh, the president of Republic of Djibouti (The former French base of the Horn of Africa and the French Somali coast).

“Secretary Hagel reiterated the United States’ commitment and partnership for regional security in the Horn of Africa and efforts to prevent al-Qaida and al-Shabaab from threatening stability and the free flow of commerce,” Kirby said. “He also stressed the importance of the newly established bilateral forum to discuss mutual security issues.”
Hagel lauded Djibouti’s contributions to the African Union Mission in Somalia, he added, and the leaders discussed current and future U.S. support for Djiboutian security forces participating in the mission.
“The conversation ended with Secretary Hagel commending the courage of Djibouti forces in operations against terrorists and thanking President Gueleh for hosting and helping ensure the safety of U.S. personnel in Djibouti,” the press secretary said. Picture: Defense Secretary Chuck Hagel, right, greets Djiboutian President Ismail Omar Guelleh at the Pentagon, May 7, 2014. by Erin  Kirk-Cuomo.

The legal case of a former CIA Yemani detainee suing Djibouti for hosting the facility where he says he was detained could be helped by the contents of a still-classified Senate report. Djibouti, a key U.S. ally for AFRICOM base, has denied for years that its territory has been used to keep suspected militant operatives in secret captivity. Official confirmation of Djibouti’s role in hosting “black sites” used in the CIA’s rendition program would be welcomed by Mohamad Al-Asad, a Yemeni arrested at his home in Tanzania on Dec. 27, 2003, blindfolded and flown to a location he insists was Djibouti.
Djibouti’s Ambassador to the U.S., Roble Olhaye, told reporters, “If something was done in the context of the American base there how would we know?” Sources: Pentagon, Al-jazeera and HAN (Horn of Africa Newsline)