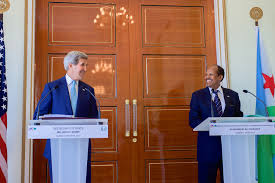 Djibouti (HAN) July 3, 2015 – Public Diplomacy and Regional Security News – Djibouti Minister -Mahamoud Ali YOUSSOUF, Minister of Foreign Affairs, said that Djibouti will be victorious in its battle with militants in Central Somalia Soon, with the help of Somali National Army (SNA) and its people. Speaking after the attacks in Lego that left more than 70 Burundi soldiers dead, Minister of Foreign Affairs said the terrorists would not prevail in Southern Somalia.

Djibouti forces on Saturday displayed a Norinco WMA301 tank destroyer for the first time, adding to its growing inventory of military hardware that can help AMISOM forces in Southern Somalia.

Djibouti defence minister Hassan Darar Houffaneh and the chief of staff of the military, General Zakaria Cheikh Ibrahim, both commented and said:

“There is no substitute for victory over terrorism in Somalia, and despite the bloody violence, systematic attacks and political and media support for extremism but that victory is inevitable and is coming. And there is no doubt that the desperate terrorism war on Somali People on the hands of the Al-Shabaab Terrorist and its international technical and financial support will fail because it is an unjust war against civilians and destruction of Somalia,” Darar Houffaneh said.

Djibouti’s armed forces on Saturday displayed in comments broadly in line with Foreign Ministry remarks
“The trust in the victory of Somalia and it’s people is predominant, with the help of Djibouti leadership led by our President Ismail Omar Ghelle.”

He said the recent terror attacks in Tunisia, Kuwait and Pakistan proved there were links between those who “pretend to be moderate and those who practice terror and terrorism”.

Meanwhile: To empower its armed forces: Djibouti Air Force’s MA60 had been converted to carry VIPs, passengers and cargo, becoming the first of its type to have this triple role.