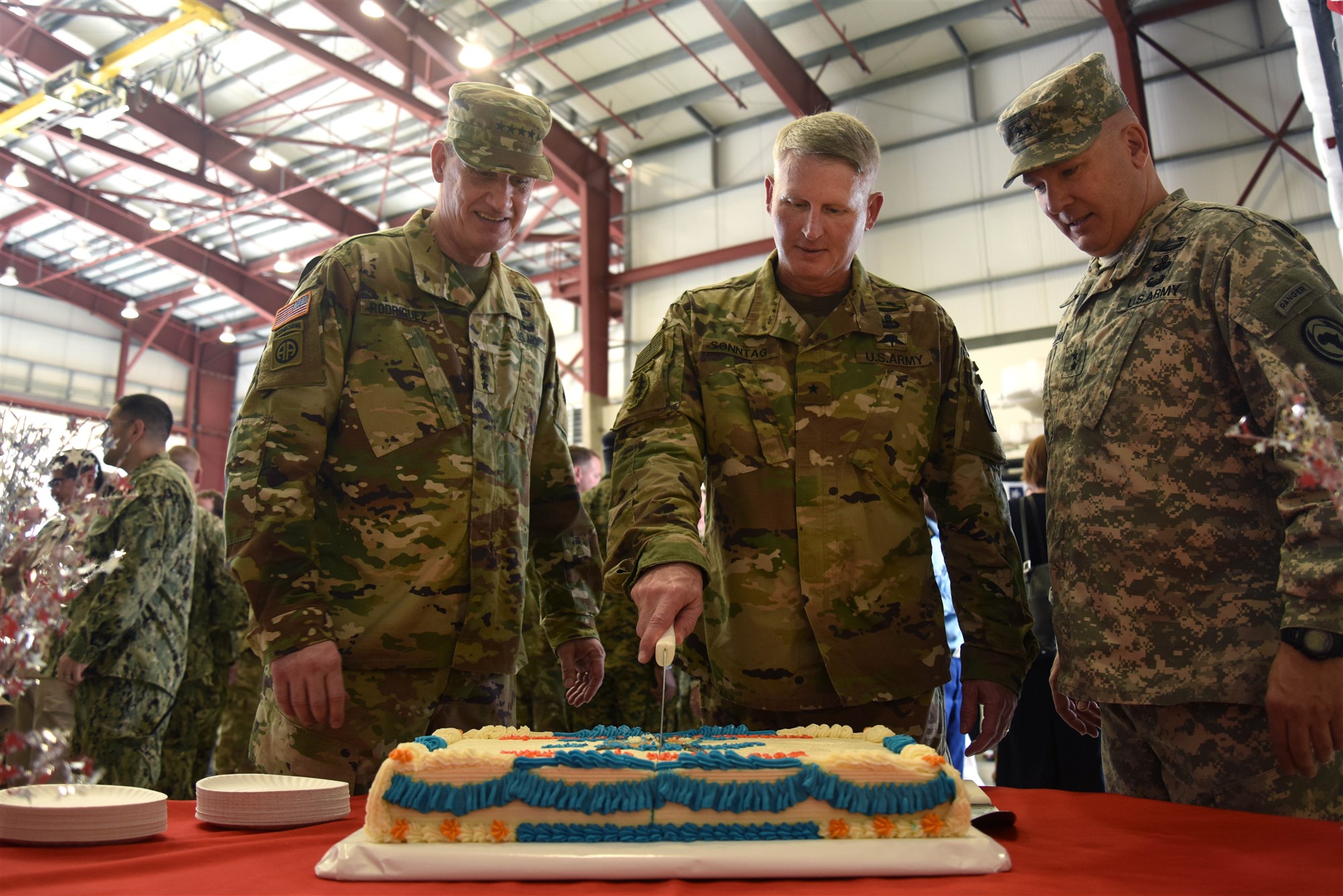 Sonntag, a California native, assumed command of CJTF-HOA after serving as commanding general for the Special Operations Command South at Homestead Air Reserve Base, Fla. He is now responsible for overseeing CJTF-HOA’s efforts in countering violent extremism in East Africa, fostering regional security cooperation, and building and maintaining U.S. strategic access in the region.

“Brig. Gen. Kurt Sonntag and Command Master Chief Geoffrey Steffee come to us from Special Operations Command South, another theater heavily focused on building partner capacity and working by, with and through their armed forces to achieve success,” Rodriquez said. “I look forward to seeing how you will bring this experience to bear in this new challenge. I know all of the U.S. partner teams and HOA welcome you to this dynamic command and wish you well.”

Before presenting his first salute as commander, Sonntag addressed the men and women of CJTF-HOA.

“CJTF-HOA, I am honored to enter your ranks and humbled to accept command of this great team and the wide range of vital missions it oversees,” Sonntag said

The change of command also featured a change of responsibility during which U.S. Navy Command Master Chief Geoffrey P. Steffee assumed the role of the CJTF-HOA command senior enlisted leader.

Prior to being selected for this assignment, the Texas native served as the senior enlisted leader at Special Operations Command South, Homestead Air Reserve Base, Fla.

Before departing Stammer shared his final thoughts of having led the men and women of CJTF-HOA.

“I have greatly enjoyed my time at CJTF-HOA, Camp Lemonnier, Djibouti, and greater Eastern Africa,” Stammer said. “America’s forces carry a nation’s task on their shoulders.  They interact with the people, practice diplomacy, dream of a better life; all the while they are prepared to apply just the right amount of force precisely, decisively, and absolutely. None do it better than the Soldiers, Sailors, Airmen, Marines, and Coast Guardsmen of CJTF-HOA side by side with our vast array of partners. I would like to express my most sincere appreciation to you all for your tireless efforts and the immeasurable sacrifices that you make in support of peace and security as we move forward, together.”