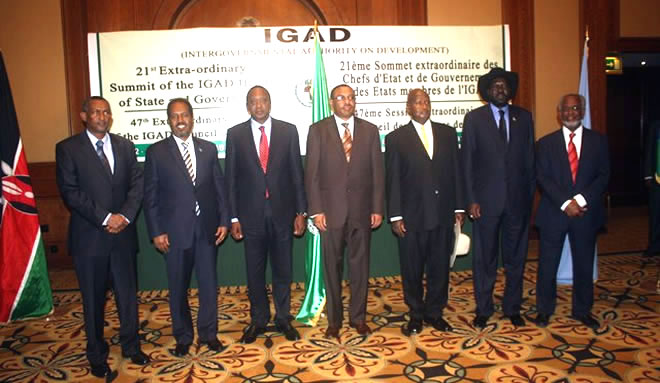 DJIBOUTI (HAN) January 29, 2016 – Public Diplomacy and Regional Stability Initiatives News. Exclusive article for Geeska Afrika Online, Copyright Opinion contributed by Hassan MK. The Inter-governmental Authority on Development (IGAD) is marking the celebrations of its 30th Anniversary on 16, January 2016 in Djibouti. Since its creation in 1986, the ever-expanding mandate of the regional body has its core operations as the promotion of four major areas in its region, namely: peace, security, economic development and regional integration.

IGAD Turns Thirty. Globally, turning 30 years old is a significant milestone in life. It at least marks the end of youth and ushers in the beginning of mature adulthood after a long period of self-discovery. For a person being 30 is the most awesome time of life. It is the time the young person leaves a carefree lifestyle to be more mature and responsible.

In the realization that each and every objective of IGAD’s mission and aspirations such as peace, prosperity and regional integration is a challenge in its own right, the article looks back at IGAD’s journey and its institutional strength and effectiveness through the lenses of one of its citizens.

Likewise, at the prospect of seeing a lot of hype around this big event, this humble article serves just as an intellectual stimulation to the social development, security analysts and opinion makers in the IGAD region who work enormously hard to use such real milestones to provide reality checks and reviews, so that the milestone does not escape their attention. The article as well briefly tracks IGAD’s progress against its raison d’être in its three decades of existence with special emphasis on Somalia’s connection with IGAD, a member state that has suffered most in this period.

In 1986, in an effort to curb recurrent hazards such as droughts and other natural disasters that resulted in widespread famine, ecological degradation in the region, six countries namely Djibouti, Ethiopia, Kenya, Somalia, Sudan and Uganda took action through the United Nations to establish Intergovernmental Authority on Drought and Development (IGADD), two more countries; Eritrea and South Sudan joined the regional body too. However, in 1995, as new socio-economic challenges emerged, the leaders of the region felt the need to revitalize the body and expand its scope. As a result, Intergovernmental Authority on Development (IGAD) was created in 1996 to supersede IGADD to enhance peace, security, economic development and regional integrationin.

In a region with a population of 200 million, one of the lowest of the human development index, with heavily managed political process where half of its eight-member states has not seen a change of leader in more than two decades, IGAD region is one of the most vulnerable regions on the African continent to conflict, food insecurity and climate change.

From humble beginning and against this backdrop, over the past 30 years, IGAD has been increasingly struggling to improve its strengths, effectiveness and relevance to rise to become a regional bloc to watch in the years to come. The IGAD Secretariat consistently convenes a back to back series of consultative meetings, conferences and courses that culminate in a consensus on the formulation and resolution of initiatives and frameworks that address the ever-emerging new challenges and situations in the region, a fact that proves IGAD to be in the front rank of the best regional groupings in the continent in terms of effectiveness and relevance.

For years, IGAD designed initiatives and frameworks, implemented things, tried things, succeeded or failed. It experienced sweet and bitter to have a lot of “has been there, done that” to the extent that very few new grounds are left to be broken or discovered in the region. By now it has the opinion, the judgment and the voice to make in the region. In other words, it calls the tune for the projects, initiatives and frameworks to the security, prosperity and integration and all other situation that arise in the region. In line with its mission and mandate, IGAD has succeeded in presenting a regionally-centered and coordinated strategy about the challenges and the crisis that arise in its region which is supported by the International Community. Somalia and Sudan being IGAD’s two major member states that receive the most part of its mediation efforts, IGAD currently has chief mediators that push for peace.
In appreciation of the great role IGAD is playing in peace-building and in promoting regional integration, environmental protection and overall development in its region, the United Religions Initiative (URI), a global interfaith network, presented its 2014 Africa Peace Award to it. The Award acknowledges the accomplishments of individuals or organizations that have exhibited extraordinary leadership to build a culture of peace and it helps to create role models of peace-builders in Africa.

Somalia is a founding-member country of IGAD. But it experiences the most widespread human suffering of all Member States of the body due to the state collapse in 1991 followed by anarchy, internal conflicts, warlordism, extremism and unfinished state-building process, a very sad state of affairs. In this regard, the Intergovernmental Body has had Somalia as the greatest challenge during its life span of the past 30 years. Somalia actually tests IGAD’s ability. Over the past two decades, IGAD has been tireless in its search for bringing peace and stability to Somalia, an effort which has constantly sapped the energy of the body. So what does the 30th anniversary of IGAD mean to Somalia?

IGAD’s active role and full engagement in supporting the re-establishment Somalia began as late as 2002 when the Somali crisis blew out of all proportion. IGAD continuously reiterates that peace and security in Somalia is IGAD’s first priority. One single most important aspect of IGAD’s involvement in Somalia over the years is its ability to consistently sustain international interest in Somali issues.

In early 2005 when the Somali Civil War seemed to be in its latest phase, IGAD saw it high time to provide peacekeeping forces for Somalia and proposed IGAD Peace Support Mission in Somalia (IGASOM). The aim of the mission was to provide protection and training to the then Transitional Federal Government. The proposal was later approved by both AU and UNSC. At the time, the Islamist insurgency was not as radicalized as it is at the present time. The plans of IGASOM did not take off as the situation in Somalia radically changed where the Islamic Courts Union (ICU) seized Mogadishu, the capital, by defeating the warlords and started to not only spread to other parts of the country but also opposed the implementation of IGASOM, a fact that made IGASOM’s proposed 8,000 strong troops not to include troops from states bordering Somalia. As a result, in February 2007, the United Nations Security Council authorized the African Union to deploy a peacekeeping mission in Somalia (the present day AMISOM).

Today, half of IGAD’s member states (Djibouti, Ethiopia, Kenya and Uganda) form the bulk of the troops contributing countries to the 22,00 strong African Union Mission in Somalia (AMISOM), a peacekeeping mission operated by AU with the approval of the UN and mandated to implement a national security plan, train the Somali security forces and support Somalia’s forces in their battle against Al-Shabab militants.

Somalis actually treasure IGAD. Believing IGAD being the most immediate level of international contact, Somalis, be it clans or organizations, use IGAD as their last resort and may well turn to its intervention whenever they feel injustice. All petitions, public cries and grievances are addressed in the first place to IGAD, but somehow Somalis do have fairly ambivalent feelings towards IGAD. There is the perception that IGAD is not doing enough in Somalia in the sense that it focuses on the political aspect of its job as its presence is only felt when there are political issues of high concern to some certain IGAD member governments.

Looking back on IGAD’s track record, over the past 20 years, in promoting peace, reconciliation, capacity building and sustaining international interest in the question of its Member State of Somalia, it is high time for Somalis to realize their worth and importance in the region and appreciate by taking stock of the tremendous efforts the Inter-regional Body has been making all along.

In this regard, I really find it practically sensible to strike the note of a very important point. Somalis recognize the role and services of IGAD to their people and country. They know that IGAD has been there all along the whole process of resolving the Somali conflict through forming core institutions and to the post conflict capacity building. In the same note, after all these years of engagement and solidarity with Somalia, considering a Somali national to be the next Executive Secretary of IGAD is of essence. It is the right time for IGAD Member States to gracefully accept the next Executive Secretary from Somalia. Doing so would be an emotional welcome relief in the sense that it would correct some misconceptions, stereotypes and national prejudices and would go a long way in the efforts of regional integration among IGAD member states.

In the successive generations during the 30-year journey, IGAD has painstakingly learned a great deal which reflects its current “IGAD Regional Strategy and Implementation Plan 2016-2020” that provides the overall framework to guide IGAD in delivering its mandate. This strategy is based on the findings and recommendations of many informed reports produced by IGAD in close collaboration with its Member States and Development Partners and serves as a tool to guide it in the implementation process of its mandate. The strategy also comes in line with attaining the UN SDGs and AU Agenda 2063. Therefore, it is high time IGAD should be more ambitious in its plans and programs to serve its region and respond to the call for a paradigm shift in implementing its mandate and in doing things differently where the member states think and work together as a region, keeping in mind that IGAD operates the best when there are good relations among its Member States.

The irony of IGAD’s efforts, as a regional bloc, in bringing peace and stability to its region in general and to Somalia in particular is that it has several concurrent internal conflicts and interests. At one point in late 1990s, IGAD region was experiencing 30 potentially threatening inter-communal conflicts. Those internal conflicts and interests range from potentially threatening inter-communal conflicts to inter-state wars within its Member States. The biggest obstacle in the way of resolving those conflicts is the sad fact that some of IGAD’s very Member States so unfortunately take sides in the internal conflicts where many believe that some regional powers use IGAD to legitimize their own regional policies.
Finally, as we reflect on the 30 years of services of IGAD, I finally urge Somalis not to despair despite the numerous challenges facing their country as the foundations of their statehood are being restored through the assistance of IGAD and the international community. I also call them to keep faith with the IGAD work in the efforts to revive their statehood.

As the 30th Milestone is the time to be focused, we could say with confidence that IGAD is not aging but it is growing old gracefully. It has every reason to smile and continue its great job. It is on the move leading its life to its dreams.

EXCLUSIVE ARTICLE FOR GEESKA AFRIKA ONLINE, COPYRIGHT 2016. By. Hassan MK is a true son of Horn of Africa (born in Ethiopia, grew up in Somalia, studied in Kenya, worked in Djibouti and extensively read about the rest of the region) He can be reached at:xmkwali69@gmail.com