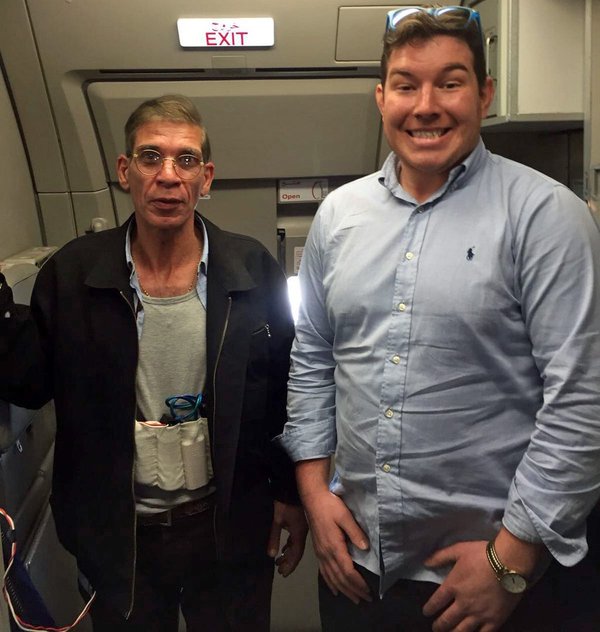 The plane was hijacked by a man claiming to have a bomb shortly after it left Alexandria bound for Cairo at around 7am on Tuesday.  One man, Mr El Ashmawy said, “called his wife to tell her about some money he was hiding in a bank”. “The funniest part is his wife forgetting about the hijack thing and asking him to repeat the bank name,” he wrote.

‘A man called his wife to tell her about some hidden money… she forgot about the hijacking and asked him to repeat the bank name’.

An EgyptAir passenger who was among the hostages held during the six-hour hijacking drama incredibly convinced the lovelorn lunatic who had seized the plane to pose for this picture amid the madness.

“I’m not sure why I did it,” Ben Innes said when it was all over.

“I just threw caution to the wind while trying to stay cheerful in the face of adversity,” he told The Sun. “I figured if his bomb was real, I’d nothing to lose anyway, so took a chance to get a closer look at it.”

Police tape seals off a hijacked EgyptAir A320 plane at Larnaca Airport in Larnaca,

The 26-year-old health-and-safety (yes, safety!) auditor from Leeds, England, said the plane was on the runway in Cyprus, with hijacker Seif Eldin Mustafa still calling the shots, when “I got one of the cabin crew to translate for me and asked if I could do a selfie with him.

“He just shrugged OK, so I stood by him and smiled for the camera while a stewardess did the snap.