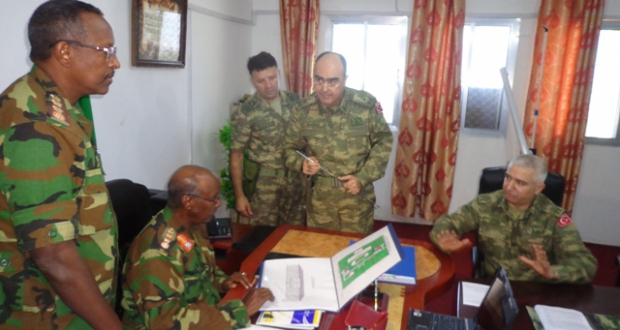 Djibouti (HAN) November 3rd, 2017 Public Diplomacy & Regional Security Services. In the nineteenth century, it was a fort used by Italian And British forces (Mogadishu and Barbara). In the twentieth century, Soviet troops moved into the crumbling facilities in both Barbara and Kismayo. In December 2009, at this site in Bali-Doogle Airbase district of Southern Somali’s Air-force base city, U.S. troops joined members of the Somali National Army (SNA) known us DANAB in preparing the way for the next round of foreign assistance mision, for Somalia security forces reform projects. On its grounds, a new military base is expected to rise, one of hundreds of camps and outposts scattered across the North, Southern and Banadir region.

Nearly a Two decade after the Bush administration launched its invasion of Southern Somalia, Geeska Afrika Online and its sister news Agency HAN offers the first actual count of American, UAE, EU, Turkey, IGAD, AU, NATO, and other coalition bases there, as well as facilities used by the Somali security forces. Such bases range from relatively small military sites. Today, according to official sources, approximately 100 bases of every size dot the Somalia countryside, and more, like the one in Barbara, Bali-Doogle, Jaziira, Kismayo, Bosaso and Baydoe, are under construction or soon will be as part of a base-building boom that began three years ago.

According to a Somali military official, future construction at the sites will make use of sand, gravel, and stone, all available on the spot. Additionally, cement, steel, bricks, lime, and gypsum have been located for purchase in Somali capital Mogadishu and Hargeisa Cities.

The Nation’s Jeremy Scahill joins the show to discuss his report on CIA operations and secret sites in Somalia. Reportedly there is another secret prison buried in the basement of Somalia’s National Security Agency headquarters where prisoners are held, some rendered from Kenya.

But that’s not all, watch (Video) to find out more.

Djibouti a former French Somali Coast, is already home to military bases from the US and France, the former colonial power, but China’s interest is now becoming increasingly apparent.

What makes this horn of Africa nation attractive to global military powers?

The US pays $63 Million Annually in rent for its Djibouti base and the Chinese also $100 Million for their Oboch base, in addition to their ongoing infrastructure projects so it is not difficult to see why Djibouti is looking past the rivalries of the global powers and enjoying its lucrative role as their landlord.