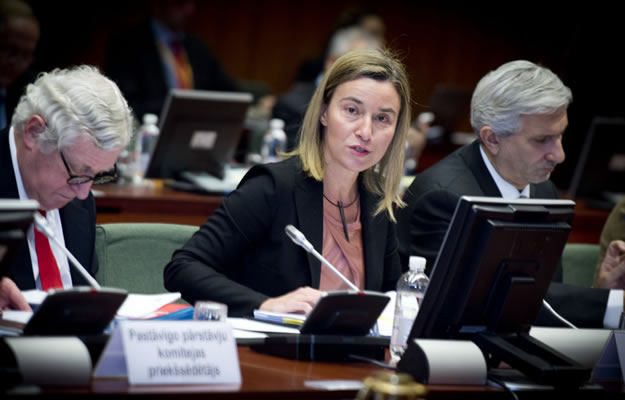 “the EU is following recent developments in Yemen with grave concern. The violence witnessed in Sana’a, in Mareb and in several other provinces, which led to the announcement of the resignations of President Hadi and of Prime Minister Bahah and his Cabinet on 22 January, as well as subsequent developments over the last two weeks have put the promises of the Yemeni transition in jeopardy. These developments are hindering prospects for a prosperous, stable, democratic and united Yemen, and threaten the territorial integrity of the country and the stability of the region, exacerbating an already dire humanitarian situation.”

High Representative and Vice-President Federica Mogherini’s remarks : Thank you for the invitation that we value very much. We are here to share with you the urgent need to face the tragedies unfolding in the Mediterranean.

2015 looks even worse than the previous year and consider than in 2013, 3 300 migrants died trying to enter the European Union by sea. Which means that three out of four people who perished by crossing a border in the world, died in the Mediterranean Sea. This tells us that our first priority must be to save lives; to prevent the loss of lives at sea. We believe, in the European Union, that this is a huge responsibility we all share, not only as Europeans but also globally.

It is an unprecedented situation, an exceptional situation that requires an exceptional and coordinated response. There is an urgent need to respond in an immediate and joint way. An emergency response to a structural phenomenon that will remain if we don’t act effectively on its deep real causes: poverty, conflicts, crisis, human rights violations all the way through Africa and the Middle East and beyond, including the situations in Syria, Afghanistan or the Horn of Africa.

We are aware of the fact that there is not one magic solution but a comprehensive response to a complex problem.

It is not only a humanitarian emergency, but also a security crisis, since smuggling networks are linked to, and in some cases finance, terrorist activities, which contributes to instability in a region that is already unstable enough.

Addressing this situation is first of all a moral duty for us, but it is also a shared interest of all countries involved; the ones around the Mediterranean as well as the countries of origin and transit.

We are here to act immediately and to act together. We need an exceptional response.

Let me say that the European Union is finally ready to take its own responsibilities: saving lives, welcoming refugees, addressing the root causes of the phenomenon, dismantling criminal organisations.

We need to address these challenge with two basic principles.
The first is Partnership. We need close partnership with the countries in the region, regional organisations starting with the African Union, the wider international community and in particular with the UN Security Council.

Tackling the root causes means tackling poverty, unequal access to resources (be it natural or financial), conflicts and crisis, violation of human rights.

What we need today is shared solidarity, long term vision and immediate action, in full partnership at regional and global level. That is why it is so important for me to be here today. The European Union will do its part. We alreadydiscussed how to face these tragedies here in New York last month. As I stressed then, the European Union is increasing its work to address the root causes of the tragedies as well as tackling trafficking and smuggling in the Mediterranean.

Since then, we have worked on this with the African Union, namely doing our “college-to-college” meeting in Brussels a few weeks ago. And next Wednesday, in just two days, the European Commission will present a new European Agenda on Migration, offering solutions to both the immediate challenges and ways to manage better migration in all aspects in the longer term, taking a new approach and taking new responsibilities.

We will propose to increase our resettlement efforts and enhance legal opportunities to reach Europe. As European Commission President Juncker said in the European Parliament few days ago: “if we close the door to all, people will come in through the windows”.

On the other side, you, the UN Security Council, also called for the full implementation of the Protocol against the Smuggling of Migrants and urged all Member States to address illicit migration flows, and contribute to dismantle smugglers networks in the region.

We all know that we need to work on the whole set of issues related to these tragedies. Tackling only one aspect will not lead to a solution. And we need to work together, as Europeans first of all – we have understood this – but also with the regional and global community.

As Europeans on 23 April we decided to step up our efforts to tackle the humanitarian tragedy in the Mediterranean.

This includes also efforts to disrupt trafficking and smuggling networks.

The European Council decided to strengthen immediately the European Union presence at sea, enforcing the existing operations Triton and Poseidon. Their capacities are being strengthened by trebling the financial resources available to them and the sending of additional maritime assets.

European leaders, on that occasion, also asked me to propose actions to disrupt the business model of human trafficking networks across the Mediterranean. Let me quote the statement of the European Council on 23 April, asking “…the High Representative to undertake systematic efforts to identify, capture and destroy vessels before they are used by traffickers in accordance with international law”.

With this, my presence here at the Security Council today is so important for us. We have in these weeks prepared for a possible naval operation in the framework of the European Union Common Security and Defence Policy. The mandate of this operation is currently being elaborated with the EU Member States in Brussels, and will be discussed by the meeting of the EU Foreign Affairs Council, in a week from now, in exactly a week from now on 18 May, with a possibility of taking decisions, the first decisions already.

This is a core fundamental value, on which the European Union was built and as I said, it is our firm intention to honour it. We are taking responsibilities, we are working hard and fast, but we do not want and we cannot work alone. We need partnerships if we want to put an end to these tragedies. We need to think and act together, we need to share responsibilities. It is a European responsibility and a global responsibility.

or the European Union, multilateralism is key. Work in partnership is key; respect and promotion of human rights and international law is key. And on issues like this, more than ever.

Let me explicitly assure you that no refugees or migrants intercepted at sea will be sent back against their will. Their rights under Geneva conventions will be fully honoured.

Let me be very clear also on another critical point, Libya. This is not all about Libya, we know that very well. This can happen in other parts of the world. But we all know also very well that the vast majority of human trafficking and smuggling in these months is happening in Libya, or rather, through Libya. As long as there is not a Unity Government that can exercise its legitimate authority over the entire territory of the country and its land and sea borders, the situation is likely to continue this way. That is why the European Union is actively and with full determination supporting the UN-led process of dialogue to reach an agreement on the formation of a Government of National Unity.

The European Union is politically, logistically, financially supporting this process. I am myself in close, daily, contact with Bernadino León in this respect. We hosted a meeting of Mayors and Municipalities of all Libya recently, as well as a business dialogue, in Brussels.

I was 10 days ago in Tunis with Bernadino León to meet and talk to all Libyan parties taking part in the dialogue. Our message to all Libyans is clear. The European Union is ready to support you in any possible way, to make sure that Libya can be the prosperous and stable country it can be, and deserves to be. Unite against all challenges your country and your people are facing, and Europe will be at your side, in the ways you will decide and determine.

This is also why we are stepping up our cooperation and support to key countries in Africa and in the Arab World such as Tunisia, Egypt, as well as Sudan, Mali and Niger. We are also stepping up cooperation with Turkey in view of the situation in Syria and Iraq. We are increasing our work within existing dialogues and partnerships as well as regional efforts such as the Rabat and Khartoum processes.

We are working with regional partners in building capacity for maritime border management and search and rescue operations.

It is also important that the EU and the countries party to the Rabat and Khartoum processes as well as the African Union work in close partnership on this issue. We therefore very much welcome the perspective of a special summit, in Malta in the autumn, as I discussed already with Mrs Zuma recently. We are addressing the issue of poverty, together, of wars, of human rights, of unequal distribution and access to resources, being it financial or other kind of resources. We need to do it in partnership with all the countries involved in this, on an equal footing in full and mutual respect.

The European Union is ready to do its part. It has not always been the case, I know. Now, I believe, we are ready to do it. I believe we are ready to address challenges that affect us all and to do it not only from a security perspective but first and foremost from a humanitarian perspective. The EU can do a lot, we will do a lot but we cannot do it alone. This has to be a common, global effort. That’s why we count on your support to save lives and dismantle criminal organisations that are exploiting people’s desperation. Let me end by quoting Pope Francis when he says “their stories make us cry and make us ashamed”. I call on you today to help us all to stop crying and stop feeling ashamed.