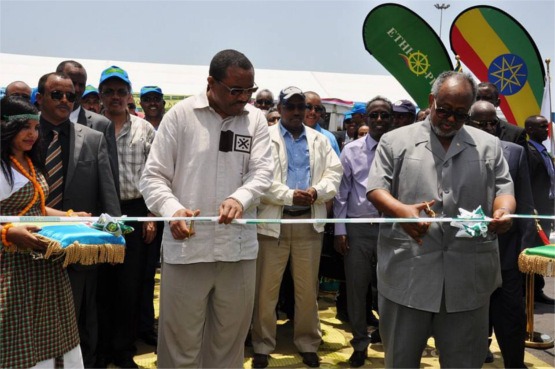 The President of the Republic of Djibouti, Ismaïl Omar Guelleh, will tomorrow welcome the Prime Minister of Ethiopia, Hailemariam Desalegn, to Djibouti for a three day State visit. The visit will mark the first official State trip by a sitting Ethiopian Prime Minister to Djibouti.

“The first visit of an Ethiopian Prime Minister to Djibouti marks a milestone in the relationship between our two nations,” said President Guelleh. “Djibouti and Ethiopia are strong, strategic partners. We share the same values, culture and economic vision. Our success as economically, politically and socially rich nations are dependent on each other and we will use this visit to continue to identify ways to integrate and grow our economics to create prosperity and security in East Africa,” he added.

During the historic visit, the leaders will discuss the ongoing programme of economic and social integration between the two countries and identify ways to expand mutual cooperation and support. The two leaders will also focus on a number of regional issues, including ways to enhance their collaboration in the fight against terrorism and the need to promote regional integration to maintain stability in the Horn of Africa and East Africa as a whole. Furthermore, the leaders will discuss Djibouti’s developing role as a natural regional logistics hub providing critical transports and communications linkages for Eastern Africa.

A number of agreements will be signed during the visit, which will increase economic and social links between Djibouti and Ethiopia and enhance their key role in the region. Furthermore, in an unprecedented move designed to reinforce the importance of the relationship between the two countries, the Ethiopian Prime Minister will directly address the people of Djibouti through their parliamentary representatives, when he speaks at the country’s National Assembly later this week.

Djibouti and Ethiopia enjoy a particularly close and synergetic relationship. In terms of trade, they are interdependent with Djibouti’s ports handling around 90% of Ethiopia’s export trade. In addition, Ethiopia accounts for 95% of Djibouti’s regional exports, consisting primarily of domestically produced salt and re-exports, whilst Ethiopia provides 76% of Djibouti’s regional imports.

Both countries have embarked on a series of major joint infrastructure projects to bolster regional integration and further advance economic and social integration. These include a new electrified railway line linking Djibouti to the Ethiopian capital Addis Ababa scheduled for completion in early 2016.

The two countries have also concluded a US$2 billion electric power interconnection agreement expected to increase affordable electricity access in Ethiopia and Djibouti through regional cooperation in power trade. The transmission line will enable Ethiopia to export up to 75MW of electricity to Djibouti and will help Djibouti to reduce its electricity costs, assist with the development of new industries, expand opportunities in Djibouti’s fishing sector and support job creation.

The close relationship with Ethiopia has supported Djibouti’s economic growth, which is forecasted by the World Bank to reach 6.5% in 2015, the highest estimates for the whole of the MENA region, which covers the whole area extending from the Middle East to North Africa, including Djibouti and Egypt. Additionally, the multi-billion dollar transport and telecommunications infrastructure investments planned in Djibouti over the coming years, which includes four new sea ports, two new airports, two new free zones, various road and rail projects and the Regional Submarine Telecommunications Project, will support the continuing expansion of both countries’ economies.

Make sure you submit your press release to the right publications through the correct channels for Global reach at Geeska Afrika Online: news@geeskaafrika.com