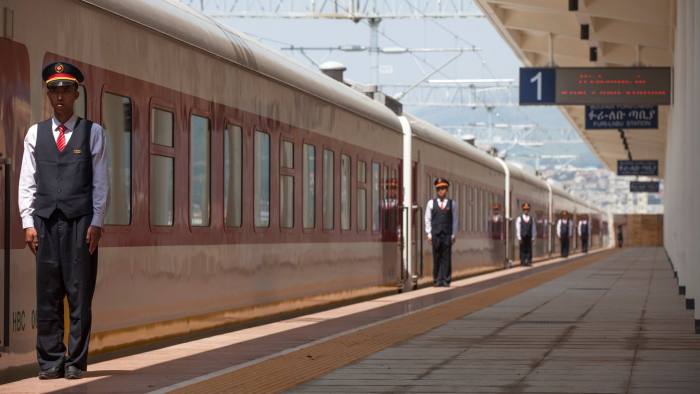 ADDIS ABABA (HAN) January 16.2017 Public Diplomacy & Regional Security News. by: John Aglionby. in Djibouti The sleek passenger train waiting for its inaugural journey at Djibouti’s barely finished Nagad station almost stretched out of sight down the platform. Three tracks behind it was an even longer goods train of dark green wagons that were so new they had yet to be stained by the dust that is ubiquitous in this corner of the Horn of Africa.

Some 2,000 people had gathered on Tuesday to celebrate the completion of Africa’s first standard-gauge, international railway, between Djibouti and the Ethiopian capital Addis Ababa. Politicians hope it will not only boost the two countries’ economies but start to unlock the continent’s untapped commercial potential.  “It’s an historic moment,” Hailemariam Desalegn, the Ethiopian prime minister, said in his speech at the ceremony. “It will significantly expand development and enhance our competitiveness in international markets.” When commercial services begin on the line in a few months, the time to transport a container from Addis Ababa to Djibouti should fall from three days to 10 hours and the cost is expected to be slashed by a third. Officials say each freight train could transport the same cargo as 200 trucks. The ports in Djibouti — which has an authoritarian government and is home to US, French and Japanese military bases — are used by landlocked Ethiopia for the vast majority of its imports and exports. The latter are mostly coffee and other agricultural products, including flowers and leather goods. It is building industrial parks in an effort to establish itself as a manufacturing hub. But Mr Hailemariam and his Djiboutian counterpart, President Ismail Omar Guelleh, have much grander ambitions than merely transforming their own nations.  “I hope it will not be too long before we are able to travel by rail from Djibouti to Dakar and other west African cities,” Mr Hailemariam said, referring to the Senegalese capital 8,400km away.