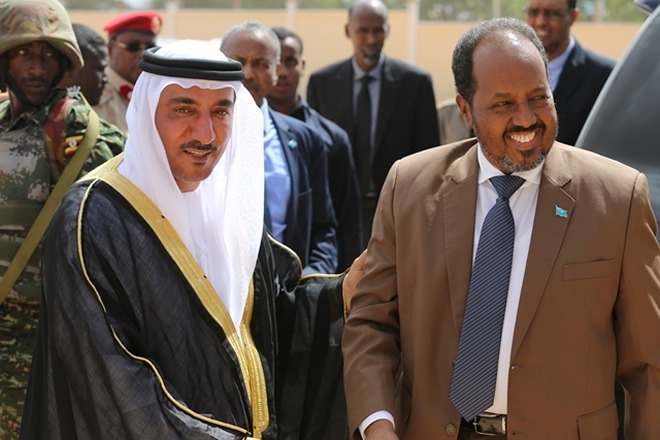 Djibouti (HAN) June 25, 2015 – Public Diplomacy and Regional Security News – Emirates Ambassador escaped suicide car bomber attack. A suicide car bomber rammed into a military car that belonged to UAE ambassador to Somalia Mohammed Al-Othman in Mogadishu, Somalia, according to media reports.“We have confirmed the death of six people, four of them civilians, while six others were also wounded, some seriously,” Somali police officer to media reports.

“A suicide bomber rammed his car into the pick-up truck and there were casualties,” said Somali security official Abdi Dahir. “There was a heavy explosion.”

Somali President Hassan Sheikh Mohamud and United Arab Emirates Envoy to Somalia Mohammed Ahmed Al Othman (pictured left). The Ambassador and two of his escorts escaped the attack with minor injuries, while a number of Somali security staff lost their lives. Al-Othman  survived the attack on his vehicle.

“The UAE will spare no effort to stand by the fellow Somali people, who have been enduring the scourge of the civil war  and terrorism for more than two decades. The UAE is working hard to provide the necessary support that helps Somalia to restore its security and stability,” ambassador Al-Othman said.

The Somali militant of Al Shabaab has claimed responsibility for the car bomber attack, which security officials say was targeted at the UAE ambassador and his diplomats.
Last week, an Al-Shabaab suicide bomber crashed an explosive ridden car into the main gate of Somali intelligence training centre. Heavy gunfire followed between armed militants, who attempted to enter the building, and security personnel.

Al-Shabaab has not yet said that its target in the attack was the UAE ambassador but the Emirates has been proactive in helping  counter-terrorism operation in Southern Somalia.

In May 2015, Somalia opened a new military training centre in Mogadishu that was funded by the UAE (Photo with President), During its ceremony to open training centre, ambassador Al-Othman said in a speech that the new centre will help Somalia to train a force that will be able to protect the country. He also specified that it was important to confront the threat of Al-Shabaab.

HAN & Geeska Afrika Online (1985-2015), the oldest free independent Free Press in the region, brings together top
journalists from across the Horn of Africa. Including Ethiopia, Somalia, Eritrea, Sudan, Djibouti, South Sudan, Uganda,  Kenya, Oromo, Amhara, Somali, Afar and Harari. Plus, we have daily translations from 150 major news organizations in the Middle East and East African regions. Contact at news@geeskaafrika.com