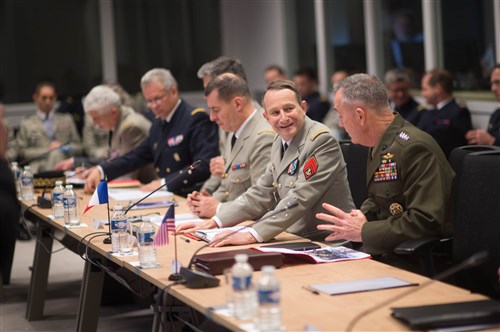 DJIBOUTI (HAN) February 1, 2016 – Public Diplomacy and Regional Stability Initiatives News. The chairman of the Joint Chiefs of Staff said today that he and his French counterpart discussed the fight against the core Islamic State of Iraq and the Levant, as well as the framework against ISIL terrorists in Libya.

Speaking to reporters after talks with his French counterpart, Gen. Pierre de Villiers, Marine Corps Gen. Joseph F. Dunford Jr. described France as an “extraordinarily capable partner” in the fight against core ISIL and in the broader fight.

Dunford said he and de Villiers discussed the framework for military action in Libya against ISIL terrorists.

Military action must be carefully thought out, he said, and must include building a coalition and finding capable partners on the ground. “It’s a pretty complex situation, and we just need to make sure that what we’re doing is nested in a political end-state,” he added.

There are no quick answers or shortcuts, especially given the consequences, the general said.

“Unchecked, I am concerned about the spread of ISIL in Libya,” Dunford said, warning that ISIL could use Libya as a platform for other activity in Africa.

“I believe that military leaders owe [Defense Secretary Ash Carter and President Barack Obama] a way ahead for dealing with the expansion of ISIL in Libya.”

In addition to targeting ISIL in the near term in the context of the political process, the strategy for Libya needs simultaneously to assist partners in the region with their own capability for providing security, Dunford said.

The longer-term strategy, the chairman said, must support the building of security capacity inside Libya.