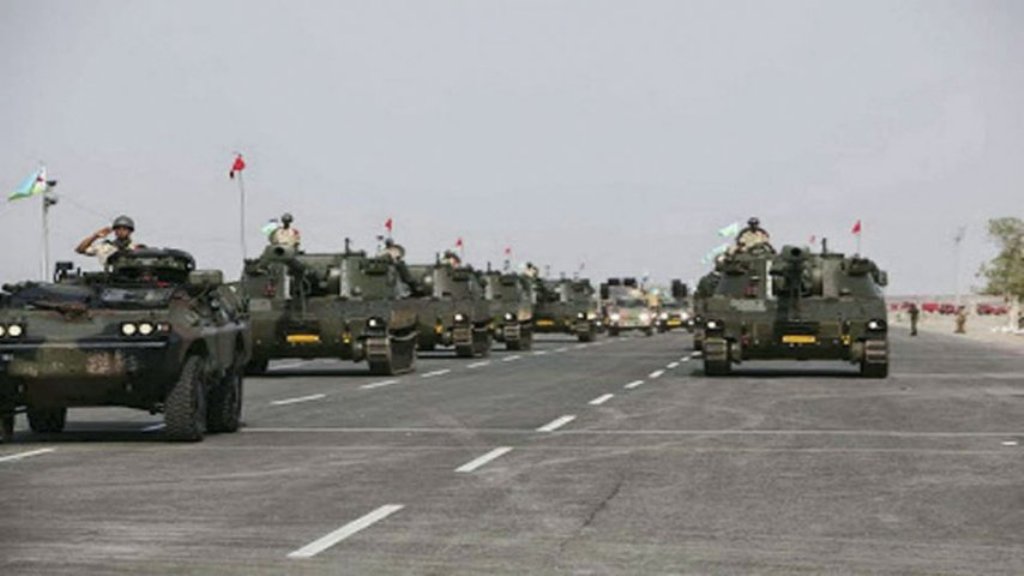 Major Ali Dheere, Acting Contingent Commander said “we are gathered here today to mark the 37th anniversary of our army’s existence, the army is the country’s strength and vital to our national security, so we have to soldier on and defend our country, even when we are hundreds of miles away”.

Djibouti television footage showed at least eight M109Ls: a version of the original M109 that was modified and rearmed with a longer range 155 mm/39-calibre barrel for the Italian Army by Oto Malera. Many M109Ls have been retired from Italian service after the delivery of new KMW PzH 2000s guns.

While self-propelled howitzers are generally used to support armoured and mechanised formations, the FAD currently does not currently operate any tanks, only AML-60/90 scout cars (14 were in the parade) and various APCs and infantry fighting vehicles, including South African Ratels and BTR-80s.

The parade also featured six Iveco 4×4 Puma APCs that had been rearmed with Chinese 12.7 mm W85 heavy machine guns. The lightly armoured vehicles were originally built for the Italian Army and Carabinieri in 4×4 and 6×6 versions. Some surplus 4×4 vehicles have been seen in Libya since that country’s 2011 conflict.

The Italian publication Analisi Difesa reported in June 2013 that 10 surplus M109L guns and three Pumas had been transferred to Djibouti.

The FAD has also acquired Force Protection Cougar mine-resistant ambush-protected vehicles, 12 of which featured in the parade.

Photo: Djiboutian forces serving with the African Union Mission in Somalia (AMISOM) today joined their counterparts back home in commemorating the 37th anniversary of the establishment of the Djiboutian Armed Forces.

Djibouti Army are the third AMISOM country to contribute to AMISOM with a contingent in Hiraan Region. The troops supporting Somali National Army recently captured the strategic town of Buulo Burto which was the supply nerve centre and home to hundreds of the Al-Qaeda linked terrorists. Jeremy Binnie, London – IHS Jane’s Defence Weekly