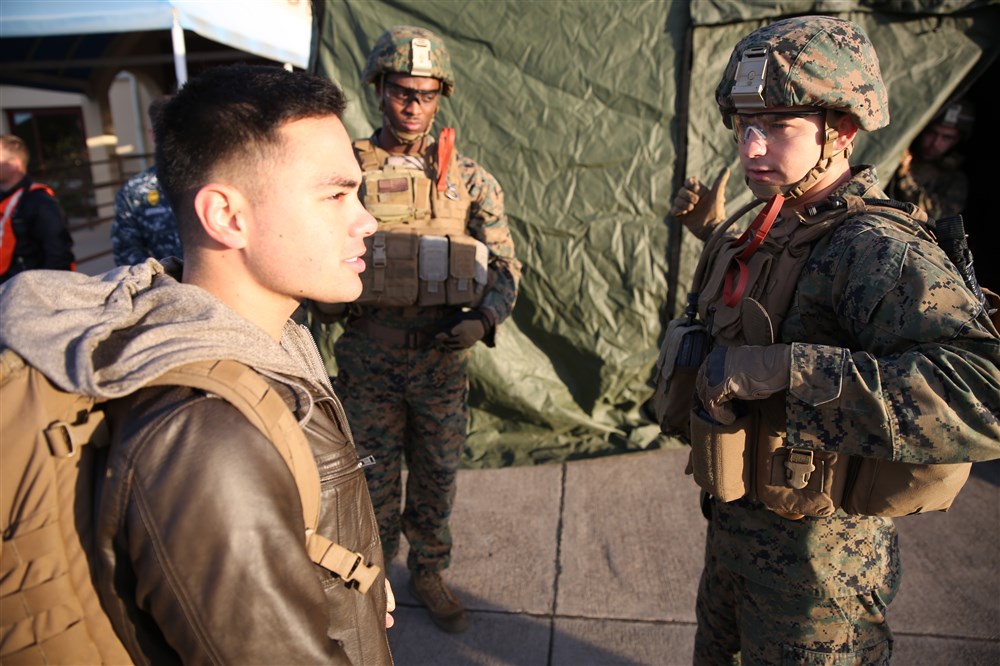 Americans traveled by ground convoy to neighboring Tunisia, before being flown to Naval Air Station Sigonella, Italy, where they were processed through an evacuation control center, or ECC, before moving on to other locations.

U.S. Navy Chief Petty Officer Jason L. Slama, the leading chief petty officer for Emergency Management Services at NAS Sigonella, remembers the ECC all too well, as he worked to ensure all services were available and in place for the evacuees.

“It was a rough time for the people being evacuated,” said Slama. “We knew, ahead of time, that the evacuation was going to happen, just not exactly when. The base personnel started planning immediately to make sure that all areas were covered to mitigate any issues that would have come up. Preparation was key to making the ECC a success.”

Nineteen months and four rotations of Marines later, NAS Sigonella is once again the site of an ECC. The current rotation of SPMAGTF-CR-AF worked with permanent NAS Sigonella personnel to establish an ECC at NAS Sigonella as an exercise, Jan. 14. The drill helped keep the crisis response unit prepared for a military assisted departure, or MAD, mission.

In a real-world situation, once the Department of State requests a MAD, U.S. Africa Command would send SPMAGTF-CR-AF Marines and sailors into the unstable area to evacuate U.S. citizens, embassy personnel, designated host-nation and third-country nationals, and prepare them for follow-on movement to a temporary safe haven or the U.S.

The ECC services include verifying identities, medical assistance, individual contraband searches, administrative processing, among others, to “ensure people with medical issues are taken care of and to safeguard against any possible contraband getting past security that could threaten lives,” said 1st Lt. John M. Cabbage, the ECC and SPMAGTF-CR-AF Headquarters Company officer in charge.

“The most recent evacuation more than a year ago makes this all the more relevant to why we are here. When we conduct these ECC exercises, it helps us to refine our skillset, should one happen again,” said Cabbage.

“The people who are evacuated are taken away from their everyday life and we need to make sure they’re taken care of. There will be uncertainty for them, but we need to make sure that all the personnel who arrive here match our database for entry, and are checked for highly infectious diseases and contraband. This is about safety for everyone.”

During the exercise, the role players, some who played the roles of pregnant women, highly contagious people or were disruptive, made the training more realistic. In one scenario, a Marine who saw a U.S. citizen having an anxiety attack quickly responded and brought the person to medical for further evaluation. In another, Marines quickly de-escalated a situation when an embassy employee was complaining about being pat down because he did not pose a threat because he was an American citizen.

The ECC exercise mimicked the operation that happened in 2014, where strictly U.S. citizens were evacuated. Cabbage stressed to the Marines and sailors there was no “reasonable belief that the evacuees would cause any danger,” but to understand they are being thrown into this situation.