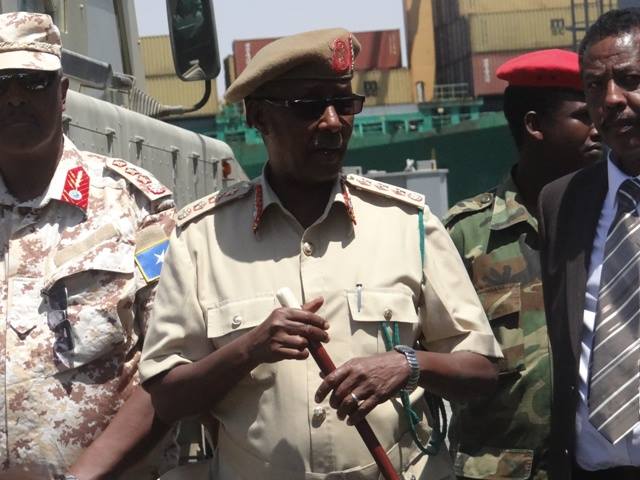 As part of the European Union’s efforts to enhance regional states’ maritime security capabilities in the Horn of Africa, based in Djibouti,  EUCAP Nestor gave six Nissan 4×4 vehicles, as well as IT and communications equipment, to the Coast Guard of the Federal Government of Somalia in Mogadishu base.

The EU Naval Force flagship, HNLMS Johan de Witt, helped to deliver two of the vehicles by sea via their Landing Craft Utility vehicles and EUTM staff assisted the teams on the ground.

The handover of the vehicles and equipment took place during a ceremony at the EUCAP Nestor compound in Mogadishu, and was attended by EUCAP Nestor’s Head of Mission, Etienne de Poncins and the Head of Country Office Somalia, Pierre-Aimé Riccio. Also in attendance was the National Security Advisor of the President of Somalia, General Abdirahman Sheikh Issa, the Chief of Defense Forces, General Dahir Adan Elmi and the Head of Somali Coast Guard, Admiral Nurey. The Commander of the EU’s Military Training Mission in Somalia, General Antonio Maggi, as well as representatives of the EU Naval Force also attended.

Speaking at the ceremony, General Abdirahman Sheikh Issa stated “Somalia has a long coastline that needs to be protected. This is not the first time that EUCAP Nestor has supported the Somali Coast Guard and we greatly appreciate your continued support.”

“In the past 12 months EUCAP Nestor, assisted by the EU Naval Force and other partners, has provided navigation, basic maritime skills and maritime investigation training in Djibouti to officers and recruits of the Somali Coast Guard. The delivery of the vehicles and IT equipment, such as computers and GPS devices, will help to enhance their on-land capability and IT connectivity.”