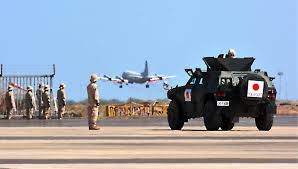 Djibouti (HAN) August 8, 2015 – Public Diplomacy and Regional Security Maritime Security News. The Japanese government has decided to extend the Maritime Self-Defense Force’s anti-piracy mission off the coast of Somalia by another year (2016). The current anti-piracy mission will expire later this year. Japan has deployed escort ships and patrol aircraft to guard commercial ships in the area since 2009.

In May this year, an MSDF rear admiral assumed the head of the multinational mission for the first time. After Cabinet approval on Tuesday, Defense Minister Gen Nakatani said threats posed by pirates have continued in the area and poverty in Somalia, which is the root cause of the problem, is yet to be alleviated. He added that Japan will continue to work to ensure safe passage in the key sea lane jointly with other countries’ units, including EU and NATO.

Photo: A Self-Defense Force P-3C maritime surveillance aircraft and light armored vehicle stationed at the SDF anti-piracy base in Djibouti