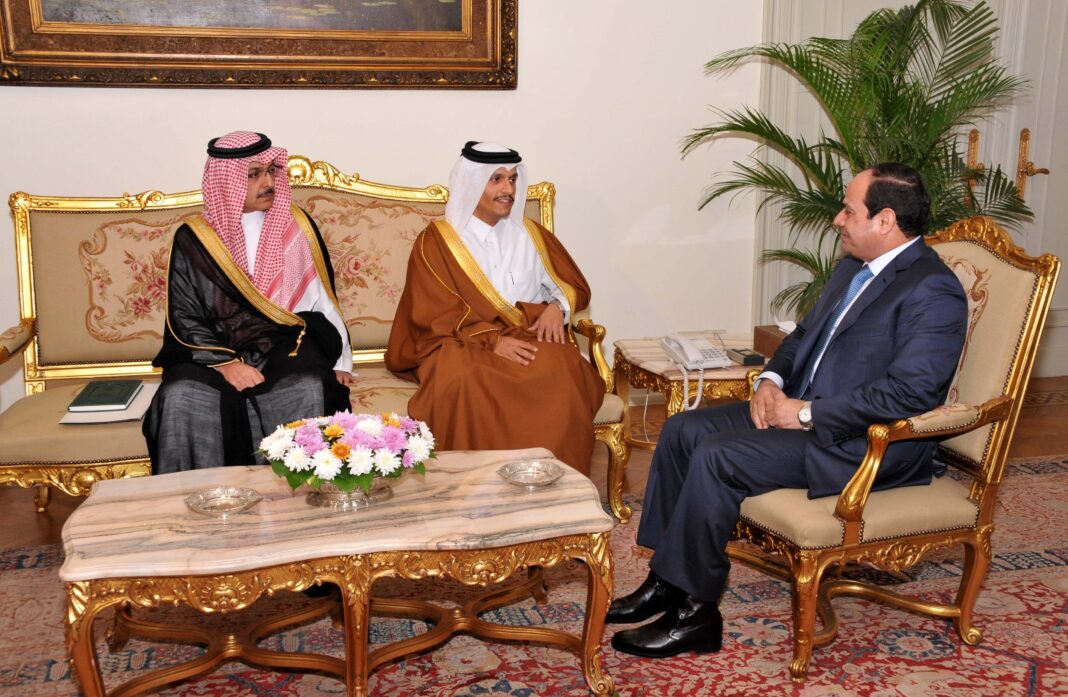 Djibouti (HAN) December 21, 2014 – Public diplomacy and the Horn of Africa related Security issues. The Egyptian Amira El-Fekki of Daily news reported the diplomatic envoy on behalf of the Emir of the State of Qatar, who arrived Egypt.

King Abdullah bin Abdulaziz Al-Saud emphasised  the “great role” played by Egypt in reaching the recent Riyadh Agreement. The agreement saw the beginning of the end of a rift between Qatar and other Gulf Cooperation Council (GCC) States.

President Abdel Fattah Al-Sisi received Sheikh Mohamed Bin Abdul Rahman, the diplomatic envoy on behalf of the Emir of the State of Qatar, Sheikh Tamim bin Hamad, along with President of the Saudi Royal Court Khalid al-Tuwaijri, amid efforts to restore deteriorated diplomatic ties with Qatar.

“Egypt is looking forward to starting a new phase beyond past conflicts, counting on the efforts of all parties to work towards positive relations with Qatar,” the Egyptian presidency said in a press statement Saturday.

The visit comes to put into effect an initiative announced by Saudi King Abdullah Bin Abdulaziz earlier in November in the “Riyadh Supplementary Agreement”, aimed at unifying efforts among Arab countries, as well as urging a conflict resolution between Egypt and Qatar, for which Egypt expressed consent.

Egypt had expressed rejection of Qatar’s interference in its internal affairs following Qatar’s condemnation of the ouster of Mohamed Morsi in July 2013, which had resulted in the withdrawal of ambassadors to both countries, in addition to tensions between Qatar and co-members of the Gulf Cooperation Council (GCC) states.

Efforts at reconciliation succeeded last November, resulting in Saudi Arabia, the UAE and Bahrain’s decisions to return their ambassadors to Doha, as Qatar had expressed a mutual desire to rebuild ties.

Photo by Presidential Office: President Abdel Fattah Al-Sisi received the diplomatic envoy on behalf of the Emir of the State of Qatar Sheikh Tamim bin Hamad, (right) and President of the Saudi Royal Court Khalid al-Tuwaijri (left) at the presidential palace on 20 December, 2014.