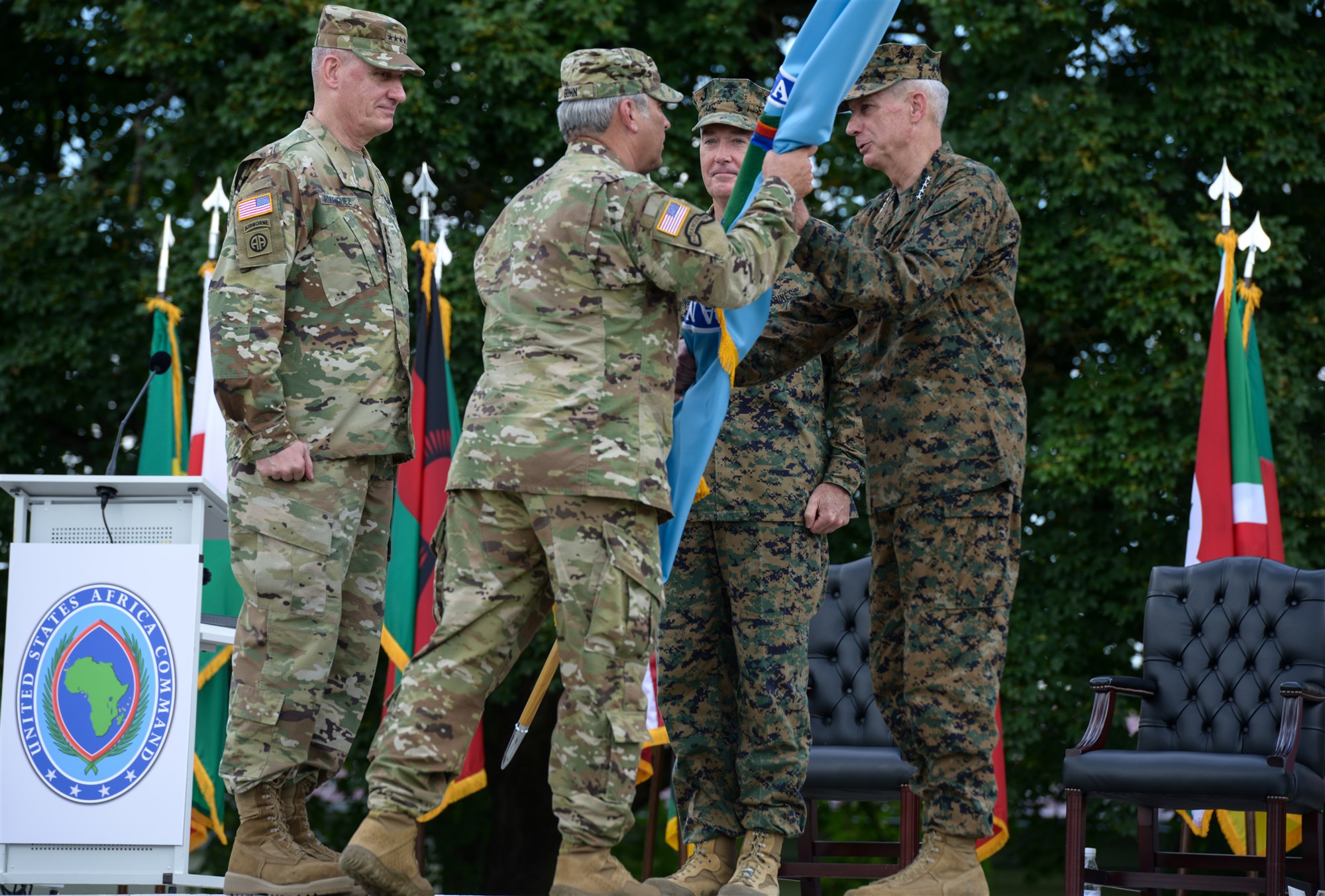 Waldhauser is the fourth commander, and the first Marine Corps general to lead AFRICOM, established in 2008 to coordinate U.S. military relations and activities with African nations, regional organizations, and the African Union. Chairman of the Joint Chiefs, U.S. Marine Corps Gen. Joe Dunford, presided over the ceremony.

“AFRICOM is hard at work with partners on the African continent to increase stability and security,” said Dunford.  “Much has been accomplished and I know there is more to be done.”

“He’s done a superb job of leading AFRICOM and in partucular making great strides in building relationships with African partners,” said Dunford.  He had equal praise for Waldhauser as the incoming commander.

Rodriguez, who traveled across the African continent meeting numerous African leaders and counterparts, is retiring later this year after 40 years of service.

“When I assumed command of AFRICOM, I thought I was well prepared,” said Rodriguez, “I soon realized that I had a lot to learn.”

“I’m extremely proud of what we’ve accomplished with our partners,” said Rodriguez.  “We’ve been able to improve our responsivness.  And with our African partners we’ve achieved many things, such and defeating the Ebola crises.”

Waldhauser comes to AFRICOM from serving as the Joint Chiefs of Staff’s Director for Joint Force Development, J7.

General Waldhauser was born in South St. Paul, Minnesota, and is a graduate of Bemidji State University. He was commissioned in 1976 as an infantry officer.

“The Chairman and I have known each other a long time,” said Waldhauser. “I’m honored to follow Gen. Rodriguez as the next commander of AFRICOM, and look forward to your support.  We’ll continue to build on the accomplishments you’ve made and to further strengthen the relationships with our interagency and African partners.”

About AFRICOM
AFRICOM is one of six of the U.S. Defense Department’s geographic unified commands and is responsible to the Secretary of Defense for military relations with African nations, the African Union, and African regional security organizations. AFRICOM oversees all U.S. Department of Defense operations, exercises, and security cooperation with African nations. AFRICOM’s core mission of assisting African states and regional organizations to strengthen their defense capabilities better enables partner nations to address their security threats and advances U.S. national security interests through focused, sustained engagement with partners in support of shared security objectives.