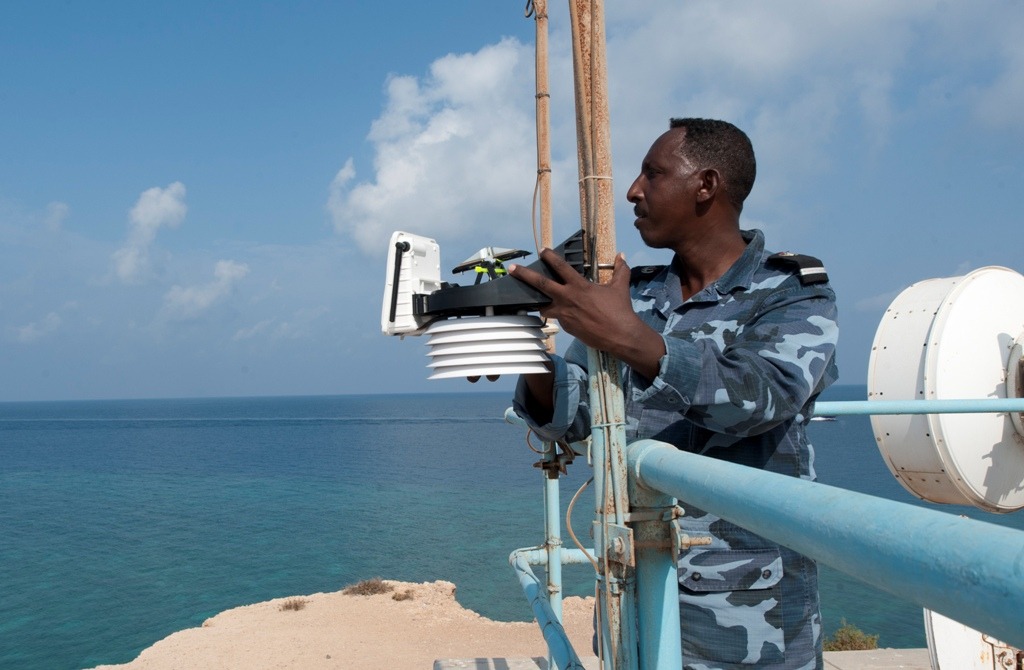 Djibouti (HAN) June 18, 2014 –  Updated news about Maritime safety and security: weather and navigation through Bab-El-Mandeb Strait. U.S. and Djiboutian Navy Sailors and AFRICOM weather systems support cadre assembled and tested new weather measurement equipment May 1, 2014 on Maskali Island, Djibouti.The equipment will provide wind speed, temperature, relative humidity and other readings. Ships transiting the Bab-El-Mandeb Strait will be able to access the information from the internet to determine the conditions on the water affected by wind. “Wind blows down the axis of the Red Sea, and it pinches into the Bab-El-Mandeb Strait,” said Lt. Cmdr. Bryan Black, CJTF-HOA Joint Meteorological and Atmospheric Operations Center officer. “Because you have all the mass and momentum into one funneling point it’s like putting your finger on the front of a hose – same amount of water but smaller hole — so the winds … speed up.”Black described the weather system as something someone could set up in their back yard in America, but on a continent three-and-a-half times the size of the continental U.S., with few weather stations, it has an impact. “The U.S. is dense with sensors and weather data is something people take for granted,” Black said. “There are only about ten sensors in the entire Horn of Africa.”Because there were not internet-capable weather sensors in the region, predictions of wind speed would be made using modeling, based on winds in the surrounding region.“Nothing beats hard data,” Black said. “Models don’t always pick up the wind and we can use the hard data to verify or adjust the numerical models and forecasts.”Among the Djiboutian Sailors assisting with the equipment installation was Djiboutian Navy Chief Master Omar Doualeh.He said he has learned a lot from working with CJTF-HOA METOC officers and wants to continue working with them. The weather instruments, he added, will give the Djiboutian Navy more information than they had available before.“It is [helpful] because we have not had this type of equipment before,” Doualeh said. “We are thankful.”Black, who has worked with Doualeh several times before, said working with the Djiboutian Navy has been rewarding.“In one sense, they seem to be much like the Navy in the U.S. … the Djiboutian Navy delegates more down to their enlisted – let them do more. So, it’s nice to see that happen.”Black described the Djiboutians as cordial, friendly and professional.“Omar has shown himself to be extremely professional – he’s a joy to work with, always willing to work with our group, willing to learn and train,” Black said about Doualeh. “He takes care of the radar systems here; he’s a technically-proficient sailor. So, it’s always nice to know you’re working with someone who’s solid in that sense.”Members of the CJTF-HOA METOC will continue to work with the Djiboutian Navy to increase the number of weather sensors in and around the Gulf of Aiden and the Bab-El-Mandeb Strait. Sources: AFRICOM.