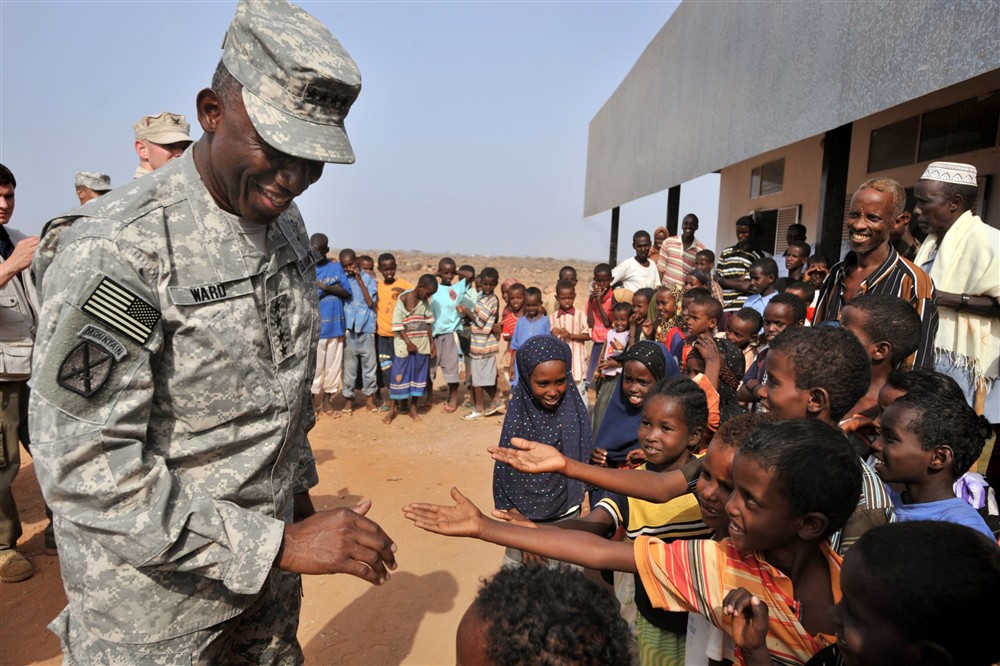 Nearly 100 students attend the school and must meet specific criteria, such as graduating from middle school, before being accepted into the four year program.

While most of the students speak French, the key to being hired in a Djibouti City hotel is the ability to speak English, and Soldiers from the 443rd Civil Affairs Battalion (CA BN) help make this happen.

“My team teaches two one and a half to two hour classes at the school every Wednesday and Thursday,” said U.S. Army Capt. Bismark Vergara, 443rd CA BN. “The Arta prefect requested the English Conversation Group program, so my team created a curriculum that we can leave here and they can follow. A lot of work went into putting it together and they did a tremendous job.”

“All the students are doing awesome,” Paget said. “We do reviews and all the students were yelling out the answers. Then I knew it was too easy, so I try to challenge them.”

When the team first arrived in Arta it took a while to get the program off the ground, but the community quickly embraced them when they saw how much they were helping the students.

“We try to get them to talk about anything, family, cooking, jobs. They’re getting a lot better,” said U.S. Army Spc. Travis Rehnelt, 443rd CA BN team one member and beginners class instructor. “The people are very happy to see us. When we first came here they were like who are you, but now they know us.”

Recognizing the difference in personalities has been an important part of connecting with the students and helping them pick up the new language more quickly.

“The Thursday class is wilder, so we adjusted our teaching style to fit the kids. After the first few classes we picked out the ones who were catching on more quickly, but now I realize that even the quiet kids have it,” Rehnelt said. “We are in week eight of teaching English and there have been immense improvements. The kids went from greetings only to now being able to tell me what they’re doing on the weekends. First we taught nouns and verbs and now we’re onto predicates and putting sentences together. The interpreter only has to jump in occasionally, when at first he had to interpret everything.”

After the day’s English class, the students who are training to be chefs or chef assistants get busy preparing and cooking a three course meal in the school’s kitchen, which is then served to the staff and the civil affairs team. The meals usually consist of a small salad, chicken or fish, rice or noodles, plus a dessert like a fruit cocktail or specialty pudding.

Their presence at this school is about much more than English. It’s also about building relationships in the community, and one way was to help the school raise money to fund the hands-on portion of their training.

“There’s a seating area where people can eat, but the budget disappeared so there was no more hands-on. So what happened was, they held a dinner and we brought people from camp to eat and they paid for their meal. The first dinner raised $670 for the school,” Vergara said. “They host the dinner once a month, but we’re hoping to do it every three weeks. The money also allowed the staff to buy the students new uniforms, in different colors depending on what they’re studying.”

Ultimately, what the civil affairs team does in places like this school is provide the tools and resources needed to build brighter futures in Djibouti.

“My favorite part about teaching is that I like to help the students. I like teaching because I am working toward the future of the country. I’m thinking of the future,” said Mouktar Hassan Bouh, Lycee Hotelier d’Arta resident English teacher.