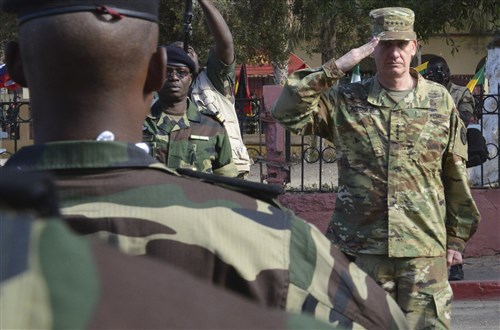 “The true value of this exercise, however, is not measured by the number of attendees but on our ability to build on our collective knowledge and put to the test in actual operations against our common enemy,” said U.S. Army Gen. David Rodriguez, commander of U.S. Africa Command.

Flintlock is designed to test and strengthen the interoperability of multinational Special Operations Forces while building the military capacity of partner nations in North and West Africa. Many participants will immediately apply what they learned from Flintlock during operations against violent extremist organizations in the region.

“The lessons received here will translate directly into tactical advantages as troops from Cameroon, Chad, Niger, Nigeria and Benin and our allies continue to execute combat operations against Boko Haram as part of a multinational joint task force,” Rodriguez said.

Rodriguez said violent extremism, illicit trafficking and other illegal activities affect multiple nations and can only be addressed by building partnerships and sharing knowledge.

“The threats facing all of us participating today are cross-border and require a regional response. Exercises like Flintlock provide an opportunity for each nation to highlight their unique knowledge, capabilities and capacity. While these abilities are impressive on their own, it is even more impressive when we build on each other’s strengths and combined talents,” Rodriguez added.

U.S. Ambassador to the Republic of Senegal Jim Zumwalt said Flintlock was more than a military exercise. With the help of interagency partners, Flintlock 2016 incorporated medical, law enforcement and community outreach projects that strengthened the military’s relationship with civilians in the region.

“As you know, collective security does not rest on military cooperation alone. Security is about forging strong relationships with the civilians that you protect. The civilian population best knows their own community, and they are your allies in routing out potential terrorist threats,” Zumwalt said.

Flintlock 2016 was the tenth Flintlock exercise and third hosted by Senegal. Partner nation militaries from Africa, Europe and North America trained throughout the country in addition to locations in Mauritania. Visit the Flintlock Feature Page for photos, video and more from the exercise.