Home Daily Security Briefing Djibouti: Across the 'Gate of Terror' in Yemen 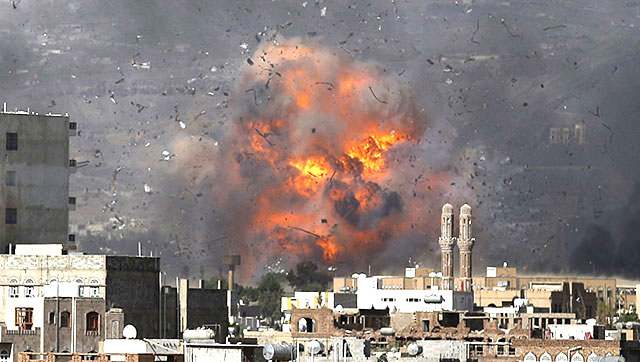 Djibouti (HAN) May 19, 2015 – Public Diplomacy and Regional Security News.  Dwarfed by warships and giant cargo vessels, the small wooden boats that brave the dangerous crossing between the Horn of Africa and Yemen are a lifeline for the desperate thousands fleeing war.

Each day they come from the Arabian Peninsula to Djibouti, crossing the waters of the Bab al-Mandeb strait — the “Gate of Tears” in Arabic — the key shipping channel of the Gulf of Aden.

Djibouti, a tiny nation of over 800,000 people, is a haven for Yemeni refugees fleeing the air strikes that have devastated their country.

“Nobody wants to help us. Saudi Arabia says no Yemenis. Egypt, no Yemenis. Jordan, no Yemenis,” said Nasser Saleh, showing the bullet wounds covering his body.

In late March, a Saudi-led coalition began air strikes against Shiite Huthi rebels, after the insurgents, who are backed by ex-soldiers loyal to Yemen’s former president Ali Abdullah Saleh, seized control of large parts of the nation.

While Yemen this week began a humanitarian truce, many remain fearful it will not hold as the ceasefire is conditional on the rebels reciprocating and not exploiting it for military advantage.

“Where can we go? The only place left for us is the grave and death,” Saleh said.

At its narrowest point, there are only some 30 kilometres (20 miles) between Yemen and Djibouti, a port that guards the entrance to the Red Sea and Suez Canal.

The fighting in Yemen has already sent thousands fleeing across the sea to Djibouti, with many more expected to make the crossing.

Sitting on the floor in the sweltering heat, Saleh chews fresh green leaves of khat, a mild stimulant.

“This is the only pain relief and rest I found, I need more drugs,” he said. His right arm has been operated on, his left is bound in a makeshift splint.

“I came here in transit, but I’ve been here now for 16 days and I can’t leave… we need specialised surgeons, but there are none here,” he said.

Along with Saleh, hundreds of Yemenis have found refuge in a half-built residential development after its owner Ibrahim Lootah offered what space he had to shelter those in need.

The real estate businessman from the United Arab Emirates also ordered his company boats to rescue those trying to escape the war.
Some have deep burns or severed limbs. Others, with scarred and mutilated faces, are testament to the intensity of the violence they fled.

“We are told that Yemen is a country with problems! That we are Al-Qaeda!” said refugee Mohamed Al Said.

“If Arab countries do not help us now in this war, when will they help us?”

The United Nations refugee agency UNHCR has set up a camp in the port city of Obock in Djibouti, but only 1,000 Yemenis have chosen to stay there. More are desperate to come.

“Many Yemenis want to leave, but the blockade, the rebels firing on the boats, the lack of boats and fuel keeps them in Yemen,” said UNHCR spokesman Frederic Van Hamme.

“We know that there are also massive population movements within the country.”

The UN expects more than 15,000 Yemeni refugees will arrive in the next six months in Djibouti, where the government says it will offer them what support it can.

“Our borders remain open, they have always been,” Djibouti President Ismail Omar Guelleh, who has led the strategic former French colony since 1999, told AFP.

At the Al-Rahma hospital in the capital’s Balbala neighbourhood, doctors admit their helplessness in the face of the severity and number of wounded.

Sitting on her bed was a little girl of seven called Farrah, who had been hospitalised for over two weeks with a bullet lodged in her brain.

“Her condition may deteriorate at any time if it (the bullet) is not taken out, but we have no neurosurgeon or MRI scanner here,” said head doctor Qassem Abdul Awwad.

Her mother cried as she begged for help. In this case, her prayers were eventually answered.

Farah was later transferred to France for treatment, UNHCR said, but thousands more badly wounded in Yemen still look desperately for help outside.

In the same room an 18-year old woman, Widad, also had hopes of medical evacuation.

She was wounded in the stomach during a Saudi bombing raid near the sports stadium in the southern port of Aden, but was stuck waiting for treatment.

“In Aden, the doctors told us to go to Djibouti and then to go to Saudi Arabia, but we are still waiting,” said her husband Mohamed Mahdi.

New arrivals come each day to the “Lootah Village,” the half-built development serving as a refuge, but the place is already overcrowded.

Taher Saleh, who manages the complex, said that with resources exhausted, they will have to stop sending ships to Yemen.

“We could bring even more people in Djibouti, but if they are stuck here it is useless,” he said. sources AFP.