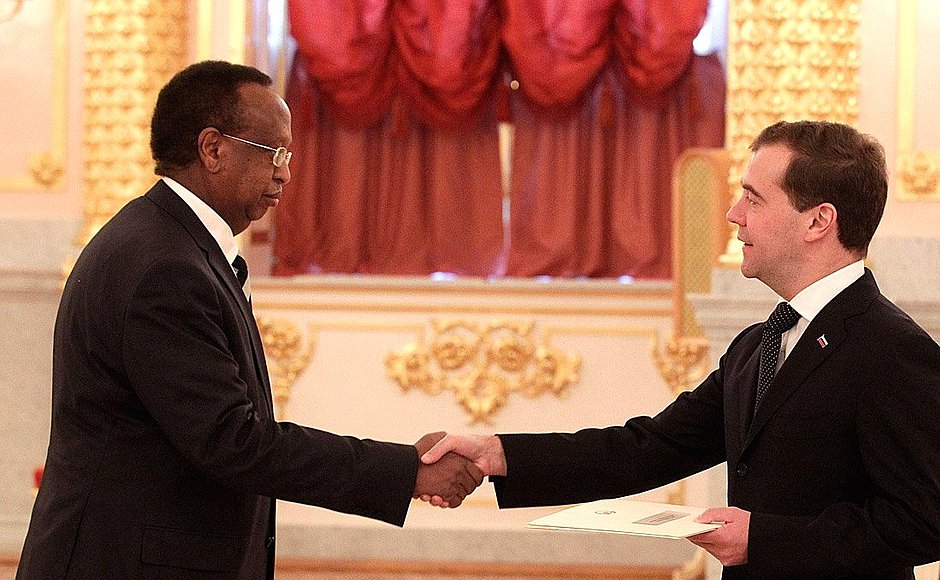 Djibouti (HAN) October 20, 2011 – Regional Security and strategic News. By Kester Kenn Klomegah.  Undoutedly, Djibouti is a typical tiny African country to be considered as a strategic partner for Russia. But, Russian Minister of Foreign Affairs, Sergey Lavrov, at joint press conference following long fruitful diplomatic talks with the visiting Djibouti Minister of Foreign Affairs and International Cooperation, Mahmoud Ali Yusuf, both readily noted that Russia and Djibouti have a long tradition of cooperation on military-technical issues, servicemen from Djibouti are regularly trained in the institutions of higher education of the Ministry of Defense of the Russian Federation.

Russian experts in Djibouti have serviced the helicopters and motor vehicles Russia supplied many years ago for the Djibouti army and there are prospects for such cooperation in the present circumstances too. Russian authorities are interested in seeing their friends in Djibouti feel “equipped” to meet the challenges the country faces in the fight against terrorism, piracy and other threats.

Lavrov pointed out that the minister’s visit was the first visit by a head of the foreign affairs agency of that state to the Russian Federation since the establishment of diplomatic relations between our two countries in 1978. The visit confirmed the similarity of both positions on the issues discussed and consolidated the mutual desire to expand cooperation in various fields, has constituted an important event in the development of Russian relations with that African country and a new step forward in reinvigorating fruitful interaction with the states of the African continent as a whole.

“We attach special significance to this visit in the light of our keenness on strengthening contacts with the Djibouti leadership, which came to power after elections in April 2011. We noted the similarity between our approaches to resolving the various problems of the African continent and to dealing with issues on the international agenda,” he said.

The first visit of a high-ranking diplomat in the history of Russian-Djibouti diplomatic relations. The scheduled programme provided grounds for negotiations between the heads of the foreign policy departments of the two countries after which the two ministries signed protocol agreements about the consultations between the parties.

Over the years, Russia has actively participated in efforts to support peacekeeping, mediation and other efforts of African states to address not only problems associated with regional conflicts, but also with economic, social development and humanitarian issues through the International Monetary Fund (IMF), World Bank (WB), specialized agencies of the UN system, and under the auspices of the Group of Eight (G8) initiatives.

Lavrov added: “Our partners value highly Russia’s contribution to the solution of the problems of the African continent in the form of African debt write-offs. Recently, in response to the drought that hit the Horn of Africa, the Russian government took decision to allocate humanitarian aid to the affected countries, including one million dollars for Djibouti.”

Both parties hoped that the ideas that emerged following the visit of a delegation of Russian experts in February of this year to Djibouti would be further developed and brought to fruition through mutually beneficial, promising economic and investment projects with the participation of Russian and Djibouti companies. As part of the visit, Lavrov and Yusuf on behalf of the foreign affairs agencies of Russia and Djibouti signed a Protocol for Inter-Foreign Ministry Consultations.

Just a few days before the visit, the Deputy Minister of Foreign Affairs, Mikhail Bogdanov received the newly appointed Ambassador of the Republic of Djibouti to Moscow, Abdi Ibrahim Absieh, who presented copies of his letters of credence.

During their conversation, they also examined issues relating to the development of traditionally friendly relations between the two countries, and discussed the problems of the stabilization of the situation in the Horn of Africa.

Ibrahim Absieh joined the delegation to hold extensive business meeting with leaders of the Russian Chamber of Commerce and Industry with the participation of members of the African Coordinating Committee on Economic Issues (AfroCom), industry directors, potential investors and the media.

Vice President of the Russian Chamber of Commerce and Industry, Georgiy Petrov, in his presentation noted that the visit of the delegation from Djibouti to Russia appears to be the first, and therefore it must become a significant step in opening the gateway for Russian enterprises for the market of Djibouti.

The development of commercial, economic and investment connections is a basic question of collaboration between the two countries and assistance in this economic collaboration should be one of the priorities, Georgiy Petrov emphasized, after which he acquainted the guests with the activities of the business chamber.

He pointed out to the powerful network of regional chambers that can help Djibouti to penetrate into any regional market of Russia vice versa. Russian business, in recent years, have shown high interest in some African countries, south of the Sahara. For strengthening of two-way communications, the chamber created special coordination committee on economic collaboration with the countries of Africa headed by [Vneshekonombanka] Chairman, Vladimir Dmitriyev, according explanation offered by Petrov.

For the Russian business, first of all, can be important the circumstance that Djibouti uses preferences in international trade: goods from this country to the territory of the countries of the customs union are not assessed tax. From its side, Russia can propose for Djibouti its work experience with Djibouti and to neighbouring African countries in the region of the building of industrial units and geological survey.

The Djiboutian delegation explained that the country is not only market, but also economic platform with the contemporary infrastructure, winches for the market for East Africa. Together in the countries, entering with Djibouti the united economic space, such, as Ethiopia, Uganda, Ruanda, Kenya, Sudan, Burundi and others, together has a population of more than 400 million.

Besides the port, Djibouti possesses the convenient road network and most developed telecommunication network in Africa. The technology used in banks is enough help for any investor, who decides to begin business in Djibouti.

The Chinese companies, according to Mahmoud Ali Yusuf, already actively engaged in the country’s production of petroleum products, export of hydrocarbons through Djibouti, plans to make immediate future connection with South Sudan, and consequently, Djibouti will be able to become interesting for Russian companies such as Gazprom.

With the concrete investment proposals of the delegation, the representatives of Russian companies and scientific research organizations plan to examine business prosals in some details.

Djibouti plans to spend $330 million on expanding its port, an exercise that is expected to be complete by 2014 and to increase the cargo throughput, its port authority said. Upon completion, the expanded port will be capable of handling 3 million containers a year from an estimated 800,000 at the end of fiscal 2011 and the one million containers by mid-2012.

Djibouti’s port, run by Dubai’s DP World, is the lifeblood of its economy. Djibouti serves as a port for its landlocked neighbour Ethiopia, which accounts for about 70 percent of traffic. Djibouti hosts France’s largest military base in Africa plus a major U.S. base, and the port is used by foreign navies patrolling busy shipping lanes off the coast of Somalia to fight piracy.

In the previous years, Djibouti which is located in the Horn of Africa has provided its port for Russian Navy to fight piracy. The Russian task force has successfully escorted several commercia

l convoys though pirate-infested waters off the Somali coast. The port of Djibouti, which has all essential infrastructures, is at the crossroads of one of the busiest shippin

g routes in the world, linking Europe, the Far East, the Horn of Africa and the Persian Gulf.

Professor Dmitri Bondarenko, Deputy Director at the Institute for African Studies under the Russian Academy of Sciences, Dmitri Suchkov, Executive Secretary of the African Coordinating Committee on Economic Issues (AfroCom), and Dr Shaabani Nzori, a Moscow based Researcher and Specialist in Oil and Gas, told Buziness Africa that Djibouti is strategic for the following reasons – good military as well as fisheries location.

It is just next to Somalia, a troubled territory with lawlessness and pirates hence having a foothold in Djibouti helps to keep an eye and check on Somalia. Moreover, the country has moderate Muslims, not those radicals in Somalia, and therefore good place for business, according to Shaabani, and added that Djibouti is just opposite to troubled Yemen on the other side of the Red Sea so it makes sense being stationed in Djibouti to watch over the other side. Bondarenko, Suchkov and Shaabani shared a common view that Djibouti, if not for business, can offer an unforgetable romantic, warm and sandy beach for holiday-making Russians.