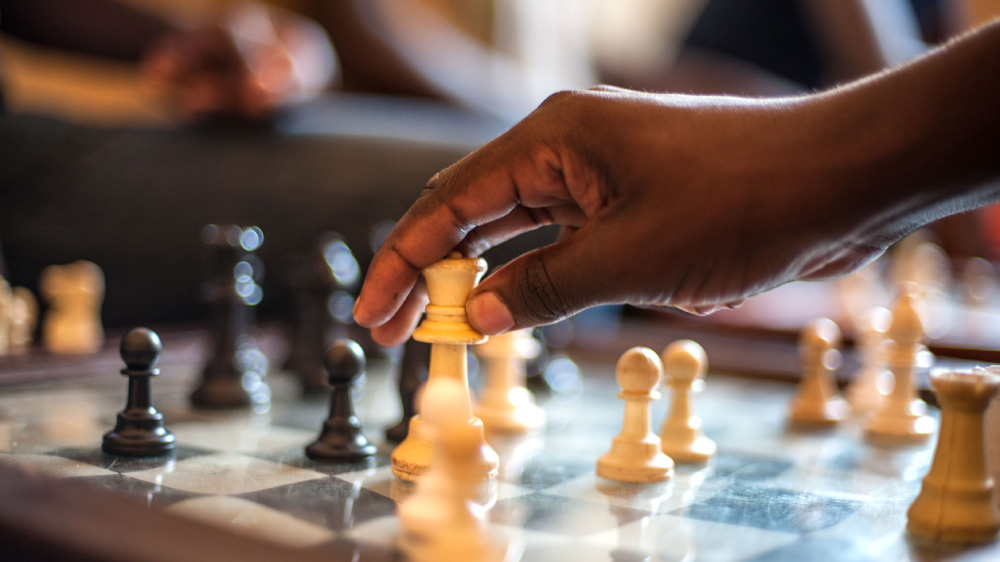 KAMPALA (HAN) July 21.2016. Public Diplomacy & Regional Security News. This is not an average chess academy. Wayward chickens wander around the boards balanced on rickety wooden benches in a cramped dirt alleyway, while neighbours look on from the porches of their tin-roofed homes.

This is Katwe, one of the largest slums in Uganda, and the scene of an unlikely chess revolution.

Since 2013, when Disney announced it was working on a feature film about a young Ugandan chess prodigy, the game’s popularity has exploded here.

The Queen of Katwe tells the rags-to-riches story of Phiona Mutesi, a young, uneducated slum girl who first turned up at one of the Katwe Academy’s chess sessions in 2005, mostly for the free porridge.

A few years later she became the first female winner of the country’s junior chess championships and by the age of 17, she was representing Uganda at international competitions.

“It gives them hope. Chess used to be seen as a game of nobles, people who’ve been abroad or been to expensive schools. Now it’s attracting everyone,” Katende said.

“I want to be like Phiona and win trophies,” said Lillian in a break between games. “I want to be the second queen of Katwe.”

The movie, which features Kenyan actress Lupita Nyong’o as Phiona and David Oyelowo as Robert, is not due to be released until September this year, but the filming – part of which took place on location in Katwe using local residents as extras – created considerable excitement, and its impact is already being felt.

Last year, a record 28 chess clubs registered with the Ugandan Chess Federation, up from just 12 a few years ago, while informal clubs are springing up in schools across the country. The turnout at the national junior championships has sky-rocketed from around 150 in 2012 to more than 700 last year.

“We’re expecting an even bigger turnout this year,” said Vianney Luggaya, the federation’s president. “A lot of people are coming and asking how they can be involved.”

A game for girls

Historically, in Uganda chess was a game enjoyed mostly by a small male elite in the capital, Kampala, but Phiona’s story has inspired people from all walks of life.

Girls, in particular, have been taking up the game in considerable numbers. Vianney said there has been a threefold increase in the number of girls entering chess tournaments since 2012. “In the children’s competitions it’s almost 50/50 now,” he said.

Meanwhile, the national side has been slowly creeping up the rankings. It currently sits in eighth place in Africa, but dominates the East African region, where its only real competitor is Kenya.

“Almost all the time we beat them,” said Vianney, smiling. “Even when they are hosting the competitions.”

Robert Katende, who also works as the federation’s director of development, hopes to build on the increased levels of interest in the game by launching a series of initiatives aimed at school-age children across the country.

He has helped to set up chess academies in four more Kampala slums, as well as in seven communities in the northern town of Gulu, which suffered some of the worst atrocities during the conflict with Joseph Kony’s Lord’s Resistance Army.

Some of Robert’s older students, from the early days of the Katwe Chess Academy, are now leading the drive to spread chess across the country.

“We’ve been conducting girls’ chess clinics too, and Phiona has been leading the campaign,” explained Robert. This year the clinics have reached more than 400 underprivileged girls, leaving a free chess set for each one.

“But my biggest hope is to see the government embracing chess as a subject in schools from primary level,” he said, pointing out that ‘brain games’ are supposed to be included in Ugandan school curriculums but are rarely used in practice. He has lobbied the education ministry but so far without success.

‘Trophies are a bonus’

Bringing chess into the mainstream has not been an easy task. Competing with televised football for funding and sponsorship is nearly impossible, while a long-running misconception among many Ugandans that chess is simply a means of gambling does not help matters.

But mostly, Robert argues, the government simply does not appreciate the benefits or importance of chess.

“I teach my children that trophies are a bonus, but that everyone achieves in chess as long as they can integrate its principles into their lives,” he told Al Jazeera over a soda in a rustic cafe overlooking Kampala’s urban sprawl.

Rachael Ofumbi, the headmistress of a Kampala primary school who introduced chess classes after hearing Phiona Mutesi’s story earlier this year, said the sessions have led to a noticeable increase in the attentiveness of her students.

“When my own daughter went to the training she became a different person… Now we have four parents who want to learn.”

For the disadvantaged youth of Katwe, where jobs are few and opportunities scarce, Phiona’s story sends a powerful message. As one of the Katwe chess players points out, in chess it’s possible for even a humble pawn to become a queen.

“Most children here don’t have goals,” said Richard Tugume, a 23-year-old Katwe resident and one of the first to join the chess academy.