Home Ethiopia Diaspora Protesters in US, Canada Back Ethiopian Government 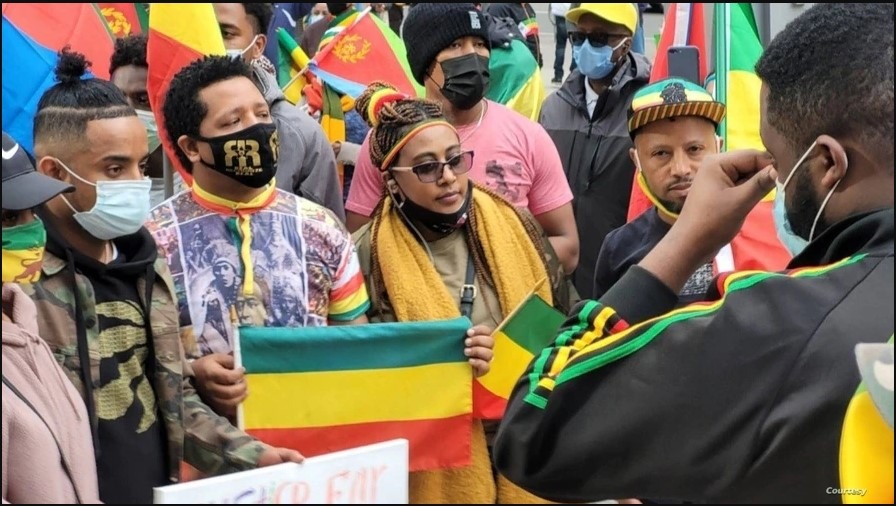 WASHINGTON By Habtamu Seyoum, Alula Kebede, Solomon Abate – Thousands of protesters mobilized by Ethiopian and Eritrean diaspora groups marched in Washington and several Canadian cities this week, condemning suggestions by U.S. officials that the Ethiopian government carried out atrocities in the Tigray region.

U.S. Secretary of State Antony Blinken and U.S. Ambassador to the United Nations Linda Thomas-Greenfield both made comments this week condemning the ongoing conflict in the northernmost region of the country.  The U.S. has also called for an independent investigation into alleged war crimes.

Testifying before Congress Wednesday, Blinken said Ethiopia’s security forces should “not abuse the human rights of the people of Tigray or commit acts of ethnic cleansing which we’ve seen in western Tigray.”

During a phone conversation with Ethiopian Prime Minister Abiy Ahmed on March 2, Blinken expressed U.S. concerns about the humanitarian and human rights crisis that has gripped the region since the start of the conflict in November.

The Ethiopian government launched what it termed a ‘law enforcement operation” in the region after accusing the Tigray People’s Liberation Front (TPLF), an armed political movement, of attacking a military post and killing federal forces.

The TPLF said it acted preemptively because it got intelligence that the Ethiopian federal government was planning to launch an attack on Tigray in collaboration with Eritrea, with whom Abiy’s government signed a peace deal in 2018.

Tensions boiled over after the TPLF, which was also Tigray’s ruling party, held an election in September that the government termed “illegal.”

Another U.S. diplomat raising concerns is Ambassador Linda Thomas-Greenfield. She called on Eritrean forces and Amhara militiamen in Tigray to leave the region. “The onus to prevent further atrocities and human suffering falls squarely on the Ethiopian government’s shoulders,” she said in remarks to the U.N.

“We urge the Ethiopian government to support an immediate end to the fighting in Tigray. And to that end, the prompt withdrawal of Eritrean forces and Amhara regional forces from Tigray are essential steps. And we urge the broader region to work fast and together toward a peaceful solution.”

The organizers and protestors in Washington, D.C. said that statements by U.S. diplomats were biased, and were based on a “disinformation campaign,” which they attribute to TPLF supporters. They said the U.S position on Ethiopia is a direct and unjust interference in Ethiopia’s internal affairs and its sovereignty.

A recent, confidential U.S. report suggests otherwise. The report concluded that Ethiopian officials and allied militia fighters from the neighboring Amhara region, who moved into Tigray in support of Prime Minister Abiy Ahmed, are “deliberately and efficiently rendering Western Tigray ethnically homogeneous through the organized use of force and intimidation.”  It added that the Ethiopian government is conducting “a systematic campaign of ethnic cleansing.”

One of the organizers of Wednesday’s protests, Benyam Getachew, said many living in the diaspora aren’t pleased with the findings.

“The U.S. statement angered many Ethiopians because it came at a time when Ethiopia is trying to take control of the situation in the area and bring order,” he said, speaking to VOA’s Amharic service. “Asking Amhara special forces to leave is interfering with our sovereignty. We want the world to know that Ethiopia is a sovereign country, and it has the ability to handle its own internal matters.”

The protesters marched to the U.S. Department of State calling upon President Biden’s Administration to refrain from what they called a “misled and misguided stance” and asked to pursue a constructive engagement with the government of Ethiopia. Protesters encouraged humanitarian support to the people of Tigray and investigations into the alleged human rights violations, a message what Secretary Blinken also voiced in his earlier remarks.

There have been similar anti-Ethiopian government protests, calling for an end to hostilities and accountability in the Tigray region. Pro-democracy protests by Eritrean and Ethiopian diaspora have also demanded withdrawal of Eritrean troops and Amhara regional forces from the region.

FILE – Youngsters walk next to an abandoned tank belonging to Tigrayan forces south of the town of Mehoni, Ethiopia, Dec. 11, 2020.

On March 12, a U.N. Security Council’s meeting on Tigray was canceled after diplomats from China, Russia and India said they couldn’t agree to issue a statement calling an end to the violence in the region. They said it was because “there is no consensus. No plan to go further,” according to Agence France Presse, the French news agency.

Outside the U.S., a group called Ethio-Canadian Network for Advocacy and Support, a community organization, in collaboration with other Ethiopian communities from major cities in Canada, organized several events in support of the Ethiopian government.

“We believe all alleged human rights violations to be thoroughly investigated and the perpetrators brought to justice,” Solomon Mitku, a Calgary resident and spokesperson for protest organizers told VOA Amharic. “Preliminary reports by some rights groups thus far, unfortunately, have left us with more questions than answers.”

The group submitted a letter to the U.S. Ambassador to Canada and consuls of the U.S. in each region, Solomon said.

Solomon said killings in the town of Axum and reports of human rights violations committed in other parts of Tigray during this conflict are getting more attention than violations in the town of Mai-Kadra. The group says that information is omitted in all the reports about the conflict.

Mai-Kadra killings “were not rendered equal degree of importance nor were they reported with the same manner,” Solomon told VOA Amharic.

This report originated in the Horn of Africa service’s VOA Amharic.