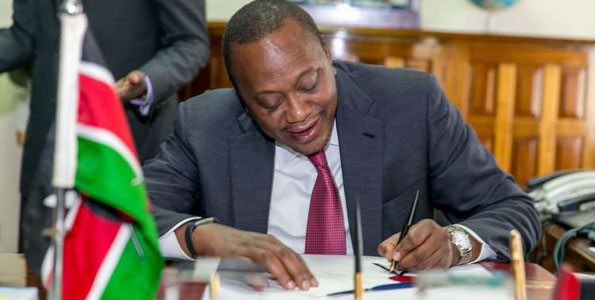 Some fifteen and a half years later, President Uhuru Kenyatta has signed into law a similar Bill proposed by Kiambu Central MP Jude Njomo, with virtually the same hype and promise that Donde’s Bill had elicited in 2000.

In his statement, President Kenyatta declared that the Banking (Amendment) Act 2016 is a response to the difficulties Kenyans face, including “credit becoming unavailable to some consumers” and the “emergence of unregulated informal and exploitative lending mechanisms.”

What has now changed to warrant assent to a similar Bill, or is it — as Jean-Baptiste Karr famously stated — “plus ça change, plus c’est la même chose?”

The backdrops to the Donde-Njomo Bills are remarkably similar.

This pain is being felt by individual as well as corporate borrowers (more than 20 listed companies have issued profit warnings in the past 12 months). Contrast these two periods to (the randomly selected mid-period) August 2007, when lending rates averaged 13 per cent and deposit rates were four per cent.

There are other commonalities too. The interest rate spreads (11-14 per cent) over both periods, have been accompanied by astronomical profits enjoyed by Kenya’s commercial banks. In CBK’s annual report of 2000, provisional results showed that in the six months ended June 2000, the aggregate performance of the banking sector reported pre-tax profits of Ksh5.2 billion.

In just three months to March this year, the sector saw profits of Ksh38.4 billion, suggesting that even before adjusting for inflation and stricter reporting for bad and doubtful loans, the sector was enjoying robust performance in both periods. In August 2007, interest rate spreads averaged between six and seven per cent while six-month aggregate pre-tax profits by the banking sector stood at Ksh20.4 billion.

While the above data shows that bank profitability has continued to grow, there are unwanted similarities as well. Total gross lending was Ksh300 billion by the end of 2000, growing to about Ksh500 billion in August 2007 and to Ksh2.2 trillion in March 2016. Against this, the stock of non-performing loans (NPLs) was an eye-popping Ksh122 billion in April 2001, (40 per cent of total lending). This figure had declined to Ks102 billion by July 2006 and to Ksh70 billion by August 2007 (17 per cent and 10 per cent of total lending respectively).

By March 2016, gross NPLs before provisioning were a worrying Ksh170 billion (eight per cent of total lending). Whereas the decline in this measure suggests improved bank supervision, it should be tempered with questions over the adequacy of loan provisioning over the preceding half decade.

But the rogue elephant in the room during both of these periods is domestic government borrowing. Domestic borrowing was disruptively high in the late 1990s — evidenced by the 91-day Treasury bill on offer for 21 per cent in June 1999. By 2000, domestic borrowing was attracting Ksh22 billion in annual interest payments. The stock of domestic debt by June 2000 stood at Ksh164 billion with new issues representing 17.5 per cent of government revenue.

In the annual budget, Cabinet Secretary Henry Rotich proposed to pay close to Ksh200 billion in interest payments on domestic debt alone. In an issue this past week (August 22, 2016) 182-day Treasury bills were traded at 11 per cent.

Significantly, from a policy perspective, by asserting that the banks alone are responsible for high lending rates, the Banking (Amendment) Act risks failure in achieving President Kenyatta’s stated objectives.

Were these accounts fronts for illicit funds held by those institutions — which would suggest that the sector’s low deposit rates are not so far-fetched as money-laundering typically entails negative deposit rates.

The movements of interbank lending rates could also shed light on the type of money changing hands in the banking sector. The interbank rate hit a peak of 25 per cent in August 1998 and averaged greater than 15 per cent in most of 1999 but was a steady average of seven per cent in 2007. However, the rate climbed to 20 per cent before September 2015 (around the time Dubai and Imperial were experiencing difficulties) before dropping to four per cent in March this year.