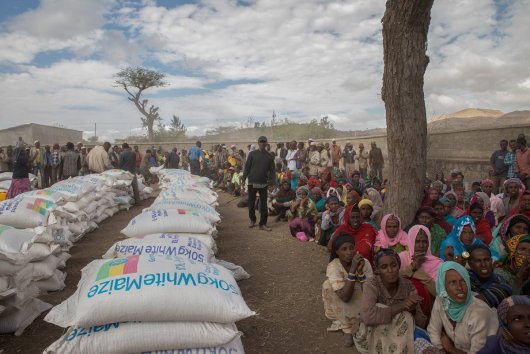 NAIROBI (HAN) April 30. 2016. Public Diplomacy & Regional Security News. by Christabel Ligami. During my recent visit to Addis Ababa, one thing caught my eyes: the increased number of people on the streets begging for food and money. This is not the same Ethiopian capital I visited last year. It is very different due to a severe drought, and the government is trying hard to keep word from getting out.

“The government doesn’t want us (media) to write about this, and especially if you are a foreign journalist, you will be in much trouble. Most of the local journalists here are in jail for reporting the hunger stories and other stories that the government is against.

“The government thinks by telling the hunger stories, it is an embarrassment to the country,” he says, echoing what I hear from other journalists as well as NGOs.

Ethiopia is facing its worst drought in at least three decades, with devastating effects on agriculture and livestock, whilst millions of people face food insecurity. More than 10 million people – one in ten Ethiopians – are said to need emergency aid due to failed rains.

The Ethiopian government and humanitarian agencies have said that Ethiopia needs nearly US$600 million in international humanitarian assistance. But critics say the government’s new leasing law for foreign concerns is aggravating the crisis by blocking livestock from grazing in areas less-affected by the drought.

One-quarter of all districts in Ethiopia – mainly in the north of the country – are officially classified as facing a food security and nutrition crisis after the drought cut production by up to 90 per cent in some areas. That has caused a flight to the cities.

“Whenever the drought occurs in these areas, people migrate to areas less affected to look for food, and Addis Ababa is one of the areas they move to, especially those just in the outskirts of the city,” said Mitiku Kassa, the Commissioner in charge of Ethiopia’s Disaster Risk Management and Food Security Agency, in an interview with Equal Times.

According to the NGO Save the Children the number of those affected could be higher, considering that 7.9 million people are supported by the government’s safety net program that provides wheat, cereals and cooking oil. It says at least 6 million children are hungry.

Experts are predicting that Ethiopia will experience the worst drought in generations, one that will surpass the 1984 famine that killed one million people.

United Sates Department of Agriculture reports that Ethiopia sought 1 million tons of wheat late last year – more than what it bought last season. The government also purchased 500,000 tons more last month through the port of Djibouti, as Ethiopia is a landlocked country.

It is estimated that imports will jump to 2.5 million tons this year, up from the 900,000 tons purchased last year. And USAID, which has deployed a disaster response team to Ethiopia, last month announced that it would provide nearly US$4 million in maize and wheat seed for more than 226,000 households.

“All the centres in the drought-affected regions have been equipped with food they need, and focus is now shifting to providing seeds and fertiliser to farmers so they can start planting following the start of rains.”

He said that the government has a budget of US$381million to cater for those affected by drought, including their animals.

The UN Food and Agriculture Organisation (FAO) early this year announced an emergency US$50 million aid to help drought-hit Ethiopians.

The United Nations also says that 5.8 million people in the country are in need water, sanitation, and hygiene services while the total assistance required in 2016 is US$1.4 billion.

The predicted number of children at risk from suffering from severe malnutrition this year is 430,000.

Paul Handley, Head of the Office for Coordination of Humanitarian Affairs (OCHA) in Ethiopia, said that by the end of the first quarter of 2016, 546,257 moderately malnourished children and pregnant and breastfeeding women were treated through the Targeted Supplementary Feeding (TSF) Programme. This represents 82 per cent of the first quarter target of 665,000 people.

“As soon as the rains start, FAO plans include distributing seeds and animal feed, vaccinating animals, delivering 100,000 sheep and goats to vulnerable households and giving farmers cash for bringing weakened and unproductive livestock to slaughter.”

He says that the current drought is not just a food crisis – it is above all a livelihood crisis.

Under Ethiopian law, land is government-owned but occupants have customary rights. In 2010, Ethiopia passed a new farm policy to which the government is leasing 3 million hectares to foreign agricultural investors who mostly include Chinese, Indians and Saudis.

According to the government, the foreign investors will have to satisfy domestic food needs before they can export, while at the same time improve the social welfare of people in the rural areas.

“You cannot speak about land issues now especially with the food insecurity in the country. You will be arrested for that,” says one official who spoke on condition of anonymity. “The vast majority of land is being used by foreigners for agriculture, especially rice cultivation in the southwest region,” he says.

Although not as affected by the drought as the northern region, the southwest is where most of the food for the country comes from.

“Pastoralists would also move to this region whenever there is drought in the north, to graze their animals, but now they can’t,” the official says. “This is one of the reasons we are witnessing the worst hunger in the country.”