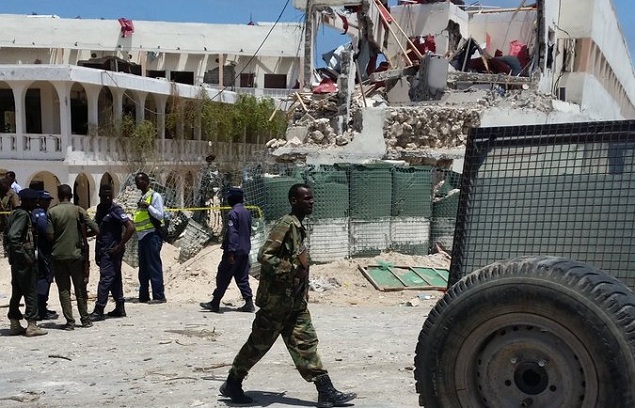 The attack was claimed by the Islamist militant group al Shabaab. The blast partially destroyed two hotels, including one in which a meeting of security officials was underway, the government has said.

“We have confirmed from various hospitals that at least 22 died and 50 others were wounded,” police officer Major Mohamed Abdullahi told Reuters.

Information Minister Mohamed Abdi Hayir said on Tuesday a security officials were gathered inside one of the hotels, the SYL, at the time of blast, and that one minister and some state radio journalists were wounded.

The hotel is frequented by government officials and police said it believed the facility was the likely target.

Seeking to impose its own harsh form of Islam, al Shabaab, wants to topple the Western-backed government in Mogadishu and also push out the 22,000-strong African Union mandated AMISOM peace keeping force backing it.

The group was forced out of Mogadishu by AMISOM in 2011 but have remained a serious threat, launching frequent attacks aimed at the government.

The militants have claimed responsibility for several explosions in Mogadishu, including a car bomb and gun attack last week at a popular beach restaurant in the capital that killed 10 people. (Reporting by Abdi Sheikh and Feisal Omar; Writing by George Obulutsa; Editing by Raissa Kasolowsky)