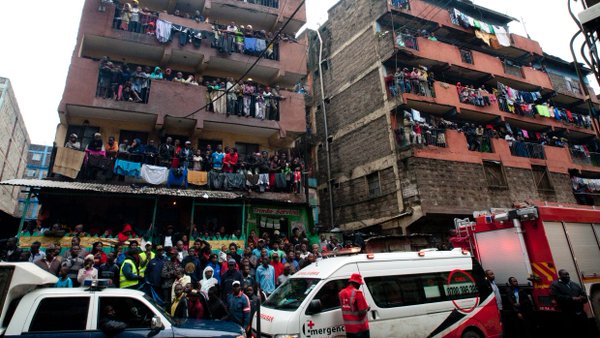 NAIROBI (HAN) May 1. 2016. Public Diplomacy & Regional Security News. The death toll from a collapsed six-storey building in Nairobi has risen to 16 from 12, the Kenya Red Cross said on Sunday, but officials declined to be drawn on how many more people might be still under the rubble.

The 198-room building in Huruma in eastern Nairobi collapsed on Friday night after heavy rain and rescue work was continuing on Sunday.

President Uhuru Kenyatta, who visited the site of the collapse, told officials “to undertake an immediate survey of all the houses in the area to find out those which are at risk of collapsing”.

He also ordered the arrest of the owners of the building, which had been condemned by the authorities.

“Those people who have died in Huruma have died an unnecessary death. That death is a product of corruption. And that is what we must fight in Nairobi,” legislator Johnson Sakaja said during Labour Day celebrations in the capital.

The Kenya Red Cross said in a statement 16 deaths had been confirmed and 135 people injured and treated for their injuries.

“Search and rescue operations are ongoing to rescue survivors that may still be trapped under the rubble,” it said.

Neither the Kenya Red Cross nor the National Disaster Operation Centre – which is leading the rescue operation – would be drawn into giving an estimate of how many people may still be under the rubble.

On Saturday, Nairobi County Deputy Governor Jonathan Mueke said the building that collapsed, and several others in the area, had been put up without their approval.

Heavy rains have led to building collapses in the past in poor neighbourhoods of the Kenyan capital, which residents have usually blamed on shoddy or illegal construction.