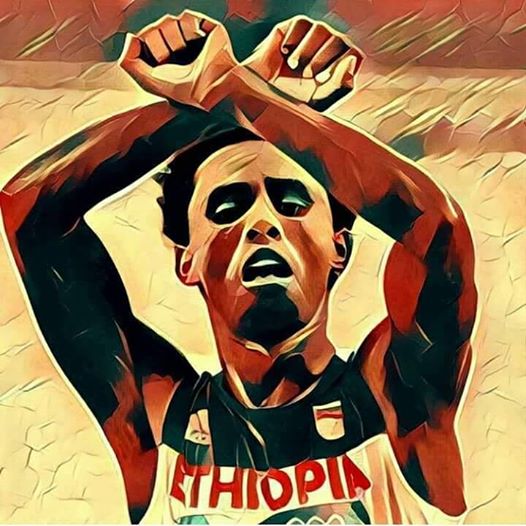 The brave gesture made by Feyisa Lilesa as he crossed the finishing line of the Olympic men’s marathon in Rio.

The runner was showing his solidarity with the Oromo people by raising his hands above his head and crossing his wrists – a symbol of the protests.

Facing imprisonment or death if he returns to his native Ethiopia, a GoFundMe crowdfunding campaign has been set up to try and assist Lilesa with making alternative arrangements. His situation is complicated more by the fact that his wife and daughter are still in Ethiopia.

Abdi Fite, Lalisaa Hikaa and Solomon Ungashe are the trio behind the campaign, which is described below:

We are calling on all Ethiopians and human rights advocates to make contributions to funds needed to support Marathon athlete Feyisa Lelisa who exhibited extraordinary heroism by becoming an international symbol for #OromoProtests and Ethiopian Freedom Movement after winning a medal at the Rio de Janeiro Olympic games today August 21, 2016.

Feyisa Lelisa faces persecution if he goes back to Ethiopia and he has decided to to seek asylum. Funds are needed to support him and his family in the meantime. Please donate whatever amount you can. We assure you all the money collected will go to support this Oromo/Ethiopian hero.

“He didn’t plan at all for this,” said Federico Rosa, Lilesa’s agent. “He doesn’t want to go to Ethiopia, he wants to go to another country. The U.S. would be very good but right now we just don’t know where he’s going to go. He was very happy after winning but also a bit confused.”

“He didn’t plan at all to go to another country,” Rosa continued. “I don’t know even when he decided to do this. He didn’t say anything to me about it. I was surprised. And you don’t do something like this for money. He did this to defend his country.”

If you’d like to help out, you can find the GoFundMe campaign here.