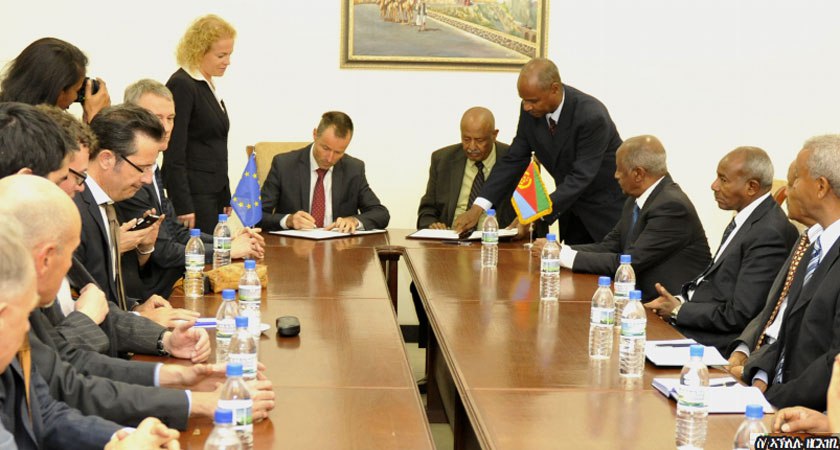 ASMARA (HAN) February 29, 2016 –By Edmund Blair Public Diplomacy and Regional Stability Initiatives News. Europe’s migration crisis and the conflict in Yemen have created opportunities for Eritrea to draw closer to the European Union and Gulf Arab states, offering the poor Horn of Africa nation the chance to end isolation it blames on U.N. sanctions.

In Reuters interviews in the capital Asmara, Eritrean government ministers and senior officials outlined deepening ties with Gulf nations and closer relations with the European Union. The foreign minister also revealed that Asmara had allowed a U.N. human rights team to tour a prison for the first time in years.

Eritrea, which insists it has always been open to improving relations, says regional and world powers are waking up to the importance of the country’s strategic position on busy Red Sea shipping lanes in a volatile region.

Western diplomats see a greater readiness to engage by the tiny nation that has long had a “go-it-alone” attitude, born of its solitary 30-year armed struggle for independence from its far bigger neighbour, Ethiopia, a quarter of a century ago.

“Over the last year or so, they have been much more open,” said one senior Western diplomat in Asmara, who requested anonymity. “A number of ministers see the isolationist, autarkic (self-sufficient) approach they had was not serving their best interests,” he added.

But diplomats say it is not just Asmara which wants better ties. The European Union signed a 200-million-euro package of financial support in January, fretting that an economically fragile Eritrea means more migrants landing on its shores and believing more employment would discourage youths from fleeing.

Gulf states have found a regional partner in their fight with rebels in Yemen, which lies just 40 km across the Red Sea.

Yet the nation that is one of Africa’s poorest and which has in the past rejected foreign aid it felt would create dependence rather than development, says it is not changing tack.

“We have never changed our vision,” said Yemane Ghebreab, political adviser to President Isaias Afwerki who has ruled since independence in 1991. “We are not very good at or very keen to play the game that we have been told we need to play.”

That is the kind of stance which has given Eritrea its “go-it-alone” reputation, which Western diplomats say often hinders their efforts to soften the approach of their capitals on U.N. sanctions – basically an arms embargo – imposed in 2009.

Yet the diplomats in Asmara, who asked not to be identified, say Asmara’s growing outreach extends beyond bilateral ties to thorny issues like human rights in a nation that is accused of holding political prisoners, a charge Asmara denies.

In February, a delegation from the U.N. Office of the High Commissioner on Human Rights was allowed to visit Sembel prison, south of the capital, the first time a U.N. mission toured a jail after years of requests.

“We are engaging with them,” Osman said, giving the first official confirmation of the visit.

A U.N. official acknowledged the visit took place without giving details. “That was a big deal,” said a diplomat while another said he believed it was the first since about 2008.

Despite the jail visit, Asmara still refuses access to another U.N.-appointed rights team, which it says is biased. The U.N. commission of inquiry issued a report in June that listed abuses, such as arbitrary detention and forced labour under the country’s national service programme. It said Eritrea may have committed crimes against humanity.

Sheila Keetharuth, the U.N. special rapporteur on the human rights situation in Eritrea and commissioner on the comission of inquiry who has not been allowed to visit, told Reuters that any sign outsiders were seeing inside any prison was positive.

But on the Sembel prison visit, she also said: “Was this a kind of PR access? Do we have today or are we going to have in the near future broader independent assessment and monitoring of prison conditions?”

“There are no grounds for the Security Council to continue sanctions,” the foreign minister said, speaking after the latest U.N. Security Council sanctions briefing. He said sanctions were an international effort “to go for isolation of Eritrea”.

At the United Nations, Russia and China lean towards easing sanctions while Britain, France and the United States do not. After the end of Italian colonial rule, Eritrea was under British control for a decade until the United Nations established Eritrea as a federated region with Ethiopia. Haile Selassie’s annexation of it as a province sparked war.

Asmara has long felt betrayed by world powers, who they say failed to force Ethiopia, now with a population of 97 million, to abide by a boundary arbitration ruling after the 1998 to 2000 border war. Ethiopia says it wants talks on implementation, which Asmara rejects.

Sanctions on Eritrea, which has an official population of 3.6 million though other estimates suggest it could be almost double that, then followed in 2009.

“They became introspective. They were rather shocked they had lost so many friends,” said Cedric Barnes, Horn of Africa director for the think-tank Crisis Group. “It takes a while to reverse the situation.”

But the migration and Yemen crises are creating a new dynamic, which diplomats say is spurred on by what they see as a realisation in government that the economy cannot afford to lose more of its educated youths leaving the country in droves.

Each month as many as 5,000 people flee Eritrea according to U.N. figures, estimates the Eritrean government disputes. Those who have left usually blame Eritrea’s compulsory national service that can last many years with low pay.

Minister Osman said migration had “become a catalyst for improving that relationship with European countries”.

On Gulf ties, he said: “The Yemeni situation has created a common understanding to deal with terrorists, with extremists and at the same time with piracy.”

Eritrea was “building up the relationship” with Saudi Arabia and letting UAE use “logistical facilities” like Assab port, he added, without outlining specific UAE activities there.

The minister said Eritrea was not receiving anything in return – an assertion diplomats question. One diplomat suggested a link between deepening Gulf ties and improvements in fuel supplies in a country which had faced shortages in early 2005.

Osman dismissed any oil transfer but he said Eritrea, which has few foreign investors outside the nascent mining industry, wanted investment from the Gulf and elsewhere. “This will create employment,” he said.

Western diplomats acknowledge a new approach is not just coming from Eritrea, which lies in a turbulent region next to Sudan where an Islamist government is in power, near Yemen where al Qaeda is active and north of Somalia where a Western-backed government is battling the al Shabaab Islamist insurgency.

“We want this country to contribute to rather than detract from stability in the Horn of Africa,” said the senior Western diplomat. “We don’t need another failed state on the shores of the Red Sea.”

Eritrea’s population is roughly half Christians, mostly living in the highlands, and half Muslims, many of whom live along the Red Sea coast.

With Islamist ideas on its doorstep, Western nations want a stable nation that can avert any seepage of ideologies. As a Gulf ally, Eritrea could also be a target for al Qaeda in Yemen. “It’s a fairly bad neighbourhood,” another diplomat said.

But Eritrea, run by a government with a strongly secular approach, says concerns that its citizens could fall prey to extremism are misplaced.

“Extremist ideas taking root in Eritrea is very difficult,” said presidential adviser Yemane. “It has been attempted over the past 25 years. It has failed miserably.”