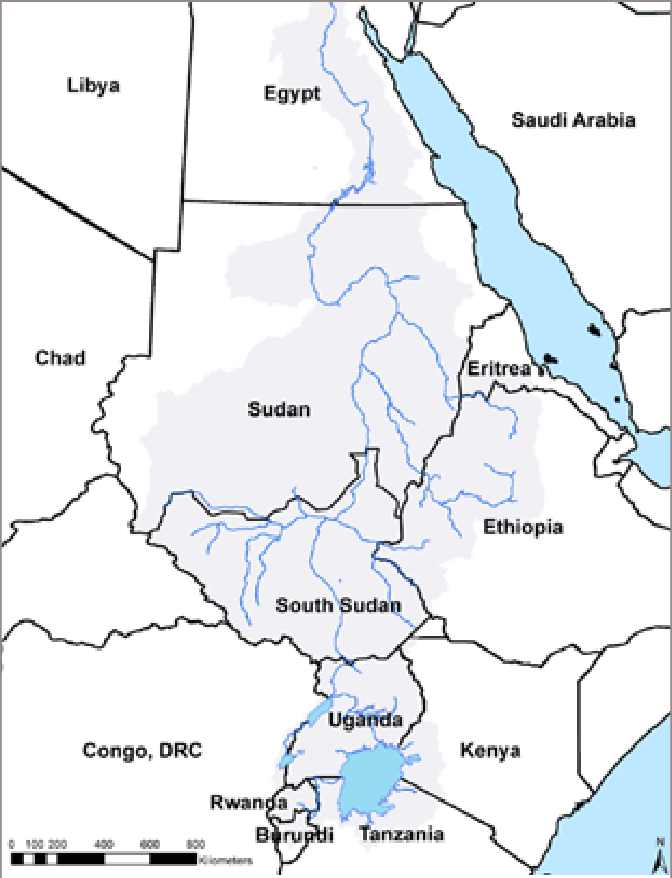 Borama (HAN). Regional Critical assets initiatives for the Horn of AfricaThe Academic paper Dr. Suleiman Walhad,  June 1st, 2021,  For Geeska Afrika Online.The Nile River is the longest in the world. It is reported to be over 6,650 km long and actually no one knows where it exactly starts, although it is now generally agreed upon that it originates in Burundi, meandering Northeastwards as the White Nile until it joins the other main tributary, the Blue Nile, in Khartoum of Sudan.

The river passes through many countries including Burundi, Rwanda, Uganda, Central Africa, Democratic Republic of Congo, Tanzania, Kenya, South Sudan, Sudan, Eritrea, Ethiopia and Egypt and finally drains into the Mediterranean Sea. A giant of a river with a long history, it remains the lifeblood of countries like Egypt and Sudan. The White Nile, after collecting water from many tributaries into Lake Victoria, Africa’s largest freshwater lake, gushes out of the Lake through the Ripon Falls in Uganda and heads north. Many other tributaries join it from the Central Africa Republic and the Democratic Republic of Congo and the Sudans (South and North) and marches through giant swamps until it is pulled further north by the swift Blue Nile, which descends from the Ethiopian highlands. The Nile produced the world’s first civilization, the ancient Egyptian one, who farmed and still farm along the banks of the river and its delta, using the soil brought down stream by the river to produce food for themselves and their animals. Until the turn of the last century, the river was taken for granted by the Egyptians, both ancient and modern, and it was only when colonial Europe came into the region that the need to regulate the flow of the river arose. A first such agreement was signed in 1929, between Great Britain, the colonial power in East Africa and Anglo-Egypt. It is referred to as the Anglo-Egyptian Treaty. (Salam Abdulqadir Abdulrahman – The Conversation Nov. 2018). The British riparian colonies of the time – Sudan, Uganda, Kenya and Tanzania and the other riparian countries of DR. Congo, Burundi, Rwanda, Central Africa Republic, Eritrea and Ethiopia, had no say in that agreement.

The agreement confirmed that Egypt would not need the consent of any riparian country to carry out any water project in its territory using the Nile River waters while it could veto any water development on the Nile by any upstream country. The 1929 agreement allowed Egypt to use 48 billion cubic meters of water annually while Sudan could use some 4 billion cubic meters annually. A second agreement was signed by now independent Egypt and Sudan in 1959 and this agreement increased Egypt’s share of water usage to 55.5 billion cubic meters annually while Sudan could use some 18.5 billion cubic meters annually (Salam Abdulqadir Abdulrahman – The Conversation Nov. 2018). Egypt considers the Nile River as its lifeline and any usage by any other country is considered a threat to Egypt. This aggressive approach by Egypt and now almost supported by the Sudan is the basis of the current impasse on the usage of the River Nile waters between all the downstream and upstream countries of the river and more so between Egypt and Ethiopia, which is the source of the Blue Nile.

The Blue Nile produces over 59% of the water that goes to Egypt. Its President of the 1980s, Anwar Al Sadat is reported to have said: “If Ethiopia takes any action to block our right to the Nile waters, there will be no alternative for us but to use force. Tampering with the rights of a nation to water is tampering with its life, and a decision to go to war on this score is indisputable in the international community.” After signing the Camp David Accord with Israel in 1979, he believed that the only other issue that could take Egypt to a war was “water”, indirectly the River Nile waters. Most Egyptian leaders including the present one, El Sisi believe in this. They forget that all rivers are God given to all the peoples who live around them and they must all share through common agreements, where one cannot take advantage over the others. The riparian countries signed a Cooperative Framework Agreement (“CFA”) to regulate usage of the waters of the River Nile. The CFA was signed by 5 of the riparian countries namely Ethiopia, Kenya, Uganda, Rwanda, and Tanzania in May 2010. Burundi joined the accord in February 2011.

Egypt and Sudan oppose the Cooperative Framework. It would be wise for Egypt and Sudan to join the other riparian countries for an equitable sharing of the Nile waters. A Collective agreement on the usage of the waters is the best guarantor for water security as opposed to unilateral master plans. The Senegal Basin The Senegal River Basin Development Organization (“SRBDO”) should be used as a prime way to share the sharing of the River Nile waters. The Senegal River flows through several countries, in the arid Sahel of West Africa, namely Guinea, Gambia, Mali, Senegal and Mauritania. The SRBDO is the only African river management entity singed by 5 of the countries through which the river runs and excluding the Gambia, that has systematically implemented the principle of equitable sharing among member states when it comes to ownership of infrastructure constructed in the river basin or water resource benefits. As many of the African rivers rise and run through different countries, Africa would need to address this issue in a more systematic and professional approach, propounding African solutions to these African problems. The Shabelle Juba Basins Sooner or later issues of water usage will rise on the Shabelle and Juba rivers between Somalia and Ethiopia.

It would be an opportune time to review, study and come up with viable solutions and more particularly when we know that the region suffers from recurrent droughts, and because of the worldwide climatic change, drier weathers. Most African organizations are generally government officials’ clubs, with little communications between the people and their organizations such as banking associations, accounting associations, lawyers’ associations or even the relevant chambers of commerce. Civic organizations and the people of the two countries should urge their governments not to take lofty but useless ideals to guide their policies. The Shabelle and Juba rivers are the only permanent water flows of Somalia, and both originate in Ethiopia. They provide water not only for agriculture and livestock, but they are also a source of potable water. The total length of Juba River is 1,808 Km, with a catchment area of about 210,010 Km2. On average, 186 cubic meters (186,000 litres) of water flow every second down the Juba River at Luuq station. The average flow of the Shabelle River at Belet Weyne Station is 75 cubic meters (75,000 litres) per second. (FAO Report June 2016).

They pose three major issues which must be managed – the issue of floods, the issue of providing irrigation for agriculture, and a source of potable water for both livestock and people and the federal government and its member states directly involved in the two rivers would need to be managed through professional bodies. The old days where access to the water freely or usage of them without due care is over. The population is increasing and so the need for water is on the rise. The long drawn civil war in Somalia destroyed the control and management systems for both flood and irrigation needs and a deliberate plan would be needed to address these matters in the future and more particularly in collaboration with the source country of both waters. Somalia does not need to go into new arguments such as the Blue Nile waters are now posing for the countries involved. Ethiopia has plans to use the waters of both Juba and Shabelle and their originating tributaries. The planned usage would include irrigation projects as well as dams for energy production. The larger portion of the river basins are in Ethiopia, but the usage of the waters in the past was mostly in Somalia. The populations that live around both regions in the river basins (in both Somalia and Ethiopia) are Somali.

This is a product of colonial European history in Africa, when Ethiopia in its current form, was created through the European influences in and around it, creating the former British and Italian Somali regions which together created the current Somalia in 1960. Map showing the Juba and Shabelle river basins in the Horn of Africa. Ethiopia’s master plans for developing and using the two river basins are a cause for concern in Somalia, which is barely recovering from a long drawn civil war. While it was difficult to liaise with Somalia in the recent past through the absence of a Somali central authority, it is not the case now and the Somali federal government and its member states are functioning entities and a dialogue between Somalia and Ethiopia on the matter of the two rivers would be necessary before a crisis grows beyond manageable levels. 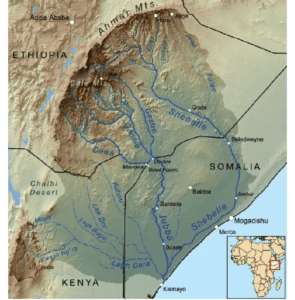 The traditional free usage of the waters by any party without reference to other users would no longer hold and hence the need for transboundary regulatory bodies. Such regulatory bodies would have to manage equal sharing of the river basins as well as their benefits. In the past both countries made master plans for the rivers as their national rivers, without working out equitable sharing agreements. These master plans were potential harbingers for conflict and non-cooperation. Due to the current climatic changes in the region and the world, both countries would face water shortages in the future, more so Somalia than Ethiopia and hence, there would be need to address those water matters before the situation becomes unbearable for both countries and this could be handled better now in view of the growing closer relations between the two countries. This would be another building block for the Horn of Africa States (“HAS”). 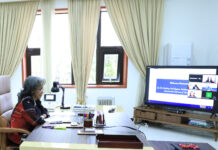 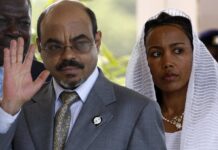 Ethiopia: Zenawi is Ruling from the Grave