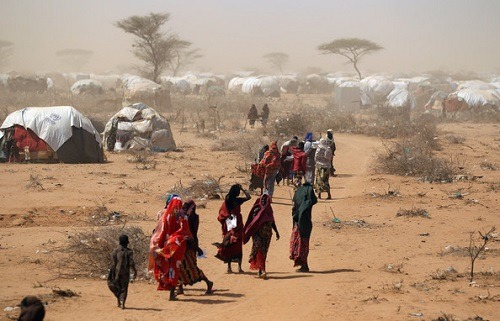 DAKAR (HAN) May 9.2016. Public Diplomacy & Regional Security News. Kenya’s plans to close two sprawling refugee camps due to fears they have been infiltrated by militant groups such as Somalia’s al Shabaab could put the lives of more than half a million refugees at risk, aid agencies and human rights groups said.

The Kenyan government on Friday said it had disbanded its Department of Refugee Affairs, and would close Kakuma camp and Dadaab, the world’s largest refugee camp, as soon as possible.

Dadaab in eastern Kenya is home to some 350,000 refugees, mainly Somalis who have fled drought, famine and war, while Kakuma, located in the northwest, hosts nearly 200,000 refugees – half coming from South Sudan where civil war erupted in 2013.

“(This is) due to immense security challenges such as threat of al Shabaab and other related terror groups that hosting of refugees has continued to pose to Kenya and due to slow nature of repatriation,” Karanja Kibicho, principal secretary of the Kenyan interior ministry, said in a statement.

Kenyan security officials believe militants, such as the al Qaeda-linked Islamist group al Shabaab, have used the refugee camps as bases to prepare attacks and then mingled with residents in urban areas to carry them out.

The government said it was aware the decision would affect the lives of refugees, and that the international community must take responsibility for their humanitarian needs in the future.

The United Nations refugee agency (UNHCR) on Monday called on the Kenyan government to reconsider its decision and to avoid actions that might be at odds with its international obligations towards people needing sanctuary from danger and persecution.

“The closure (of Dadaab) would risk some 330,000 Somali lives and have extreme humanitarian consequences, forcing people to return to a war-torn country with minimal access to vital medical and humanitarian assistance,” MSF said in a statement.

Amnesty International said it acknowledged that the resettlement of refugees to third countries had been slow, but urged Kenya to consider fully integrating refugees into society.

Kenya hosts the second largest number of refugees on the African continent, some having arrived as long as 25 years ago. Legally, all refugees must live in camps and they cannot work.

The government has previously announced plans to restrict Somali refugees to camps, and separately threatened to relocate them if the United Nations did not move them.

The announcement could lead to more extortion and abuse for refugees at the hands of Kenyan police and other security forces, according to the charity Refugees International.

“Refugees in Kenya were already struggling for survival … this statement only worsens the situation, leaving their lives in limbo,” said the charity’s Mark Yarnell.