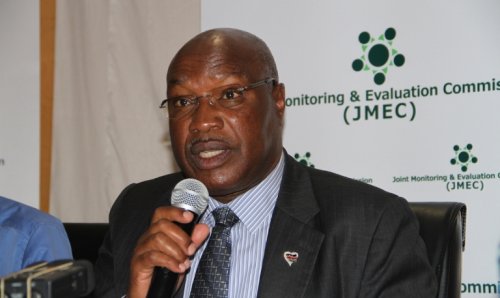 South Sudan’s peace monitoring body (R-JMEC) have called on the government to urgently release funds for the implementation of pending tasks that delayed the formation of a unity government.

“All of us know that time is against us, and this should keep us focused on achieving the tasks that have unfortunately held up the formation of the RTGoNU (Revitalized Government of National Unity) on a solid foundation,” R-JMEC’s interim chairperson, Ambassador Lt. Gen. Augostino Njoroge said on Wednesday.

“The clock is ticking, and your work and commitment to the people of South Sudan is clear and much needed,” he added.

Njoroge was speaking at the closing of a workshop convened by the regional bloc (IGAD), RJMEC, African Union Commission and ceasefire monitoring body (CTSAMVM) for the revitalized peace deal security mechanisms.

The workshop was aimed at agreeing on a roadmap with clear timelines for the implementation of the Transitional Security Arrangements within the one hundred (100) days extension of the Pre-Transitional period.

The senior R-JMEC official, during the workshop, reiterated his call on the government to release the necessary funding.

“One day without funding is one day wasted, and surely the release of funds is a strong indicator of political will,” he said.

Njoroge also advised the parties to ensure transparency and accountability in the implementation of activities.

“I would like to remind all of you of the need to fine-tune your budgets and keep them realistic, and to implement activities according to principles of transparency and accountability,” he stressed.