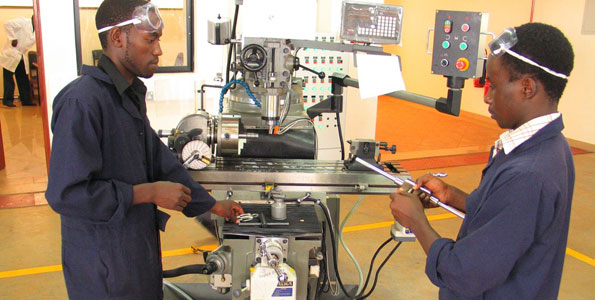 This marks the second phase of the programme that aims to grow Kenya’s labour pool in technical fields and drive the country’s agenda of industrialising by 2030 for growth and wealth creation.

The first phase, which started in 2013, involved 10 learning institutions and 15,000 students at a cost of Sh3.3 billion ($33 million) including Technical University of Kenya (TUK) in the capital Nairobi.

“The contract has been signed already, paving way for the funding,” AVIC vice president Liu Jun told the press on Friday during a tour of TUK’s labs where dozens of machines have been installed.

The Made in Kenya and Study in China programme aims to enlarge Kenya’s portfolio of finished goods that are manufactured locally and strengthen its balance of trade.

The chairman of China’s parliament, National People’s Congress, Zhang Dejiang, who has been on a state visit to Kenya, said that the initiative would help bridge deficits in bilateral trade currently tilted in favour of Beijing.

Manufacturing’s contribution to the GDP has averaged at 11 per cent in the past 10 years showing a general stagnation of the sector in Kenya.

This has seen the country’s import bill, which towers above exports, on the rise as traders buy from foreign markets goods that cannot be manufactured locally, piling pressure on the shilling.

As part of its industrialisation drive, Kenya plans to develop several industrial parks in its coastal towns and around geothermal fields in Naivasha and Nakuru to spur growth. This will require a large pool of technical manpower.

Education stakeholders have recently raised concerns over growing preference among university students for courses in humanities and social sciences while shunning science and technology-based fields that are crucial in driving industrial growth.

The World Bank says that the small share of Kenya’s manufactured exports is partly to blame for the high current account deficit.

“Even with lower oil prices, the deficit remains high at 9.8 per cent of GDP because imports of capital and equipment increased more than 25 per cent. But as imports soar, exports continue to dip,” the World Bank says in a research paper.