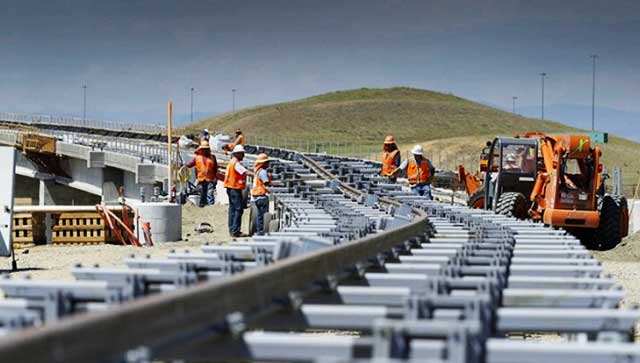 According to Mokenen, 70% of the total cost was financed by the Exim Bank of China, the China Development Bank, and the Industrial and Commercial Bank of China while 30% was covered by the Ethiopian government.

The electrified railway line which provides both freight and passenger transportation services will allow landlocked Ethiopia to easily access to world markets and further boost the country’s trade volume hence it reduces travel time by over 50%.

According to the official, the railroad further saves foreign currency that would have been spent on diesel fuel and reduce air pollution.

He added that 1,171 wagons with a capacity to transport 3,500 tons at once and 41 locomotives will be in full service when the Ethiopia-Djibouti railway line enters into full operation following 3-6 months trial rides.

The freight trains can ride at a speed of 90 kilometers per hour while passenger trains which can carry over 1100 people at once can hit at 120 km/hr.

It will take only around 10-12 hours for the electrified trains to reach Addis Ababa from Djibouti.

It used to take 3-7 days for the former Diesel locomotives to cover the same route.

The modern and fully electrified trains, which were all imported from china have different facilities, among others beds, kitchen, restaurants, VIP rooms and toilets.

The project manager said the new Ethiopia’s cross-border railroad project is part of the East to West African railway network.

“It is part of the trans-Africa railway network and it will open opportunity of linking Ethiopia with neighboring countries” Mokenen told Sudan Tribune during a government-organized a day-long media tour to the Ethiopia-Djibouti railway project.

As well as Djibouti, Mokenen said Ethiopia will eventually be connected by railway with, Kenya, Sudan and South Sudan.

Ethiopia is investing billions of dollars on constructing transport infrastructures to improve transport access and to boost the socio-economic development of the country.

During the second Growth and Transformation Plan (GTP-2), launched last year, the east African nation has plans to construct a total 5,000 kilometers-long railway lines which would enable the country link with its neighbors.

The country has so far constructed some 2400 kilometers of rail roads and will construct 2600 kilometers during the remaining GTP-2 period.

When Ethiopia-Djibouti railroad goes to full function, it will avoid delays in the transport of goods by over 50%.

The completion of the new railway track comes only months after the Ethiopian capital inaugurated sub-Saharan Africa’s first light rail system which has eased transportation problems of continent’s second most populace nation.

Ethiopia, one of the world’s fastest growing economies, attaches construction of road and railway projects as a major component of the GTP-2 as part of its vision to join middle income countries by 2025.

Ethiopia says cross-border road and railway lines will allow it to boom its economy hence it connects it with to the regional and global trade routes.

Transport Minister Workneh Gebeyehu recently stressed that the development of a country shouldn’t be confined by the borders of that country.