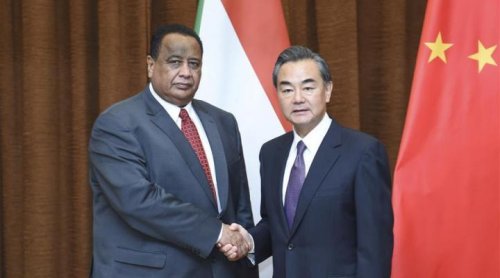 During a meeting in Beijing with the visiting Sudanese foreign minister on Saturday, the Chinese Deputy President Li Yuanchao described Sudan as “a friend of iron,” that you can always count on, according to a statement by the foreign ministry in Khartoum.

The office of Sudanese minister of foreign affairs noted that Yuanchao and Ghandour also discussed developments in Sudan and the East of Africa region.

On Friday, Ghandour met with his Chinese counterpart Wang Yi and discussed issues of mutual interest and efforts to address obstacles hindering coordination between Sudan and China before international forums.

Yi has pledged to support Sudan in safeguarding the integrity of its territory and to enhance strategic partnership between the two countries, hailing the “mutual trust” between the China and Sudan.

Ghandour has hailed China vital support to Sudan before international institutions and in achieving economic and social development.

China claims most of the South China Sea, through which about $5 trillion in trade passes every year. Brunei, Malaysia, Taiwan and Vietnam also have similar claims to parts of it.

Beijing has invested more than $20 billion in Sudan mostly in the oil sector during the past two decades. Beijing provides low-interest loans and weapons transfers in return for oil.

During a visit by President Omer al-Bashir to China in 2015, Sudan and China signed “strategic partnership” that gave China the right to explore oil in new fields after Sudan lost 75% of its oil resources after South Sudan secession in 2011.