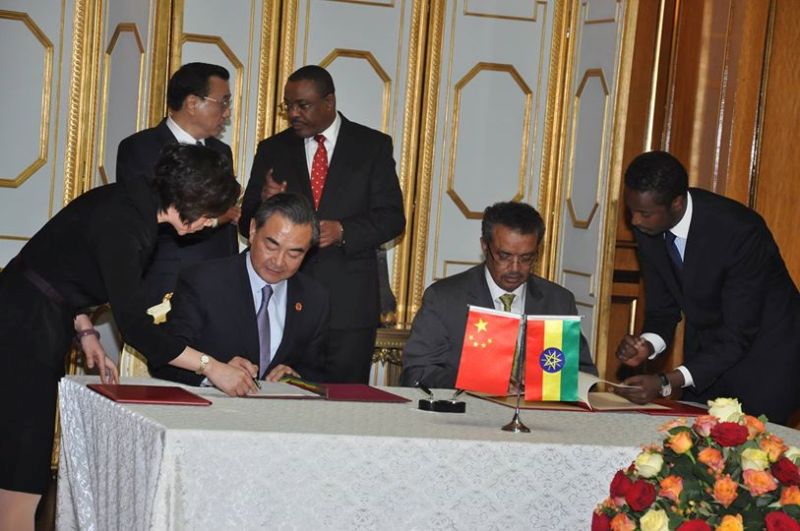 London (HAN) May 14, 2014. Strategic trade between China and Ethiopia has risen greatly over the past 15 years, so it is probably not that surprising that over the past decade Chinese investment in Africa has also flourished. Other forms of China-African collaboration have also blossomed. For example, China’s Prime Minister Li Qiyenag and Prime Minister Hailemariam witnessed last week a signing of sixteen agreements by respective heads of ministries of the two governments and business leaders.

The agreements are Mutual Visa Exemption for Holders of Diplomatic and Service Passports, Implementation Program for the years 2014-2017 under the cultural cooperation agreement, Extradition Treaty, Treaty on Mutual Legal Assistance in Civil and Commercial Matters, Minutes of the eighth joint commission session on economic, science and technical cooperation and trade, Exchange of letters on providing security inspection equipment, Comprehensive Framework Agreement (2015-2024) between Ministry of Finance and Economic Development of the Federal Democratic Republic of Ethiopia and Ministry of Commerce of the People’s Republic of China, Agreement on China – Ethiopia Economic and Trade Cooperation Zones, Package Cooperation Framework Agreement in relation to Supporting Ethiopia in its Social and Economic Development, Preferential Buyer Credit Loan Agreement on Dire Dawa-Dewelle Road Project , Individual Facility Agreement for Welkait Sugar Factory Project, Loan Agreement on OPGW project. A 150 million Remnibi interest free loan and grant of the same amount was also signed. The Premier announced also the release of the AddisAbaba- Djibouti railway project loan worth $1.3 billion.

Also agreement was reached on technology transfer of all forms including high level technology and those that suit the demands of Ethiopia. Following Prime Minister Hailemariam’s note that Ethiopia provides attractive opportunities to China’s labour intensive industries as it has a comparative advantage in cheap labor and low energy supply, Premier Li said China appreciates in the complementarity of the needs of the two countries.

He said his government is committed to encourage more Chinese investment to Ethiopia. In relation to activities of Chinese companies in Ethiopia, Prime Minister Hailemariam said his government draws satisfaction in the execution of such major projects as mobile telephone expansion, Addis Ababa Light Railway, Adama Wind Farm Addis-Adama Expressway which he said their delivery is crucial to meet the GTP.

The two sides (China and Ethiopia ) also agreed to work together and share experience in trade logistics by establishing institutional support system in East Africa and regional African partners.