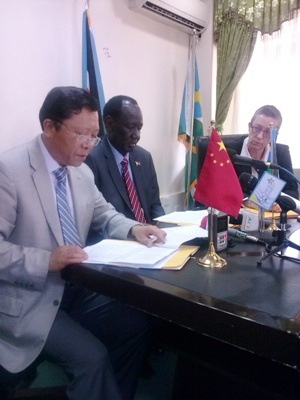 JUBA (HAN) April 11. 2016. Public Diplomacy & Regional Security News.. The Chinese government has donated 1,700 tons of rice to South Sudan in the wake of the current humanitarian crisis in the world’s youngest nation.

The move, the Chinese ambassador said, will help tackle the deteriorating humanitarian situations in the war-torn nation.

“Rice is the first phase of Chinese donation agreed upon by the two governments in July 2015,” said Ma Qiang, while promising medical aid to the East African country.

Last week, it an assessment by two United Nations agencies revealed that civil strife and unfavourable rains have further reduced crop production in South Sudan, contributing to a cereal deficit of 381,000 metric tons, 53% greater than in 2015 – and aggravating the already severe food shortages.

Cereal prices have shot up nearly five-fold since early last year, making it increasingly difficult for people to get enough to eat, according to a new joint Crop and Food Security Assessment Mission report by the Food and Agriculture Organization of the United Nations (FAO) and World Food Programme (WFP).

The crisis in South Sudan is marked by alarming levels of hunger. Some 5.8 million people, or nearly half of the country’s population, are reportedly unsure where their next meal will come from, while the rate of severe food insecurity has now reached 12%, double the rate of one year ago.

“South Sudan is facing a deadly blend of conflict, economic hardship and poor rains. Together, they are worsening a hunger gap that we fear will force more people to go hungry and increase malnutrition,” WFP country director, Joyce Luma said during the report launch.

“This report makes it clear that improving the food situation requires a peaceful resolution to the conflict,” she added.

In recent months, however, most South Sudanese families have been forced to cope with soaring cereal prices, which are driven by a combination of the sharp devaluation of the local currency (SSP) as well as higher transport costs.

Only about 4.5% of South Sudan’s arable land is being cultivated, despite its huge potential for agricultural production.