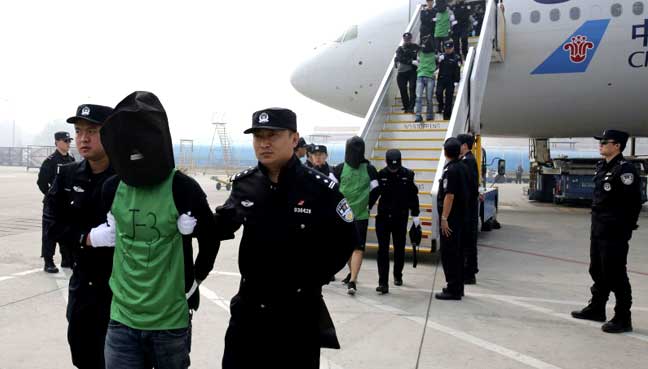 BEIJING (HAN) May 2. 2016. Public Diplomacy & Regional Security News. Confessions by two more Taiwanese telecoms fraud suspects, from among dozens deported from Kenya to China last month, were aired by Chinese state television on Monday, appearing to back China’s contention that such crimes are lightly dealt with in Taiwan.

The case, and subsequent deportations of Taiwanese from Malaysia for similar suspected crimes, has infuriated Taiwan and soured ties that were already strained by the election in January of a pro-independence party in Taipei.

Taiwan has said China effectively kidnapped its nationals. China says they are criminals wanted for serious crimes in China and that it has every right to try them, accusing Taiwan of turning a blind eye to crime and politicising the issue.

The videos are the latest in a recent string of on-camera confessions in China that have prompted international criticism that the admissions could have been made under duress.

Chinese state television showed two men it said were from Taiwan and had been deported from Kenya.

The men, whose faces were blurred out, were identified by their family names of Lin and Hsu and spoke with Taiwanese accents. It was not possible to verify their origins independently.

The report said Lin, 46, set up a Kenyan fraud cell which called people in China to extort money by pretending to be law enforcement officers.

Lin had been jailed in Taiwan in 2011 for telecoms fraud, state television said, but was only given a six-month sentence and resumed his crimes upon release.

“Of course I want to go back to Taiwan. Because it’s closer to home and because the sentence will probably be quite light,” Lin said.

Calls to the Ministry of Public Security seeking comment went unanswered. State television said the interviews were conducted on Sunday at a Beijing detention facility.

The Mainland Affairs Council, Taiwan’s top China policymaker, called on Beijing to pursue the criminal cases under “the universal value of due process”.

“Before the suspects are judged to have committed a crime, the principle of presumption of innocence should apply,” the council said in a statement to Reuters in response to a question about China’s use of media for confessions.

China and Taiwan are expected to have more talks on the case soon.