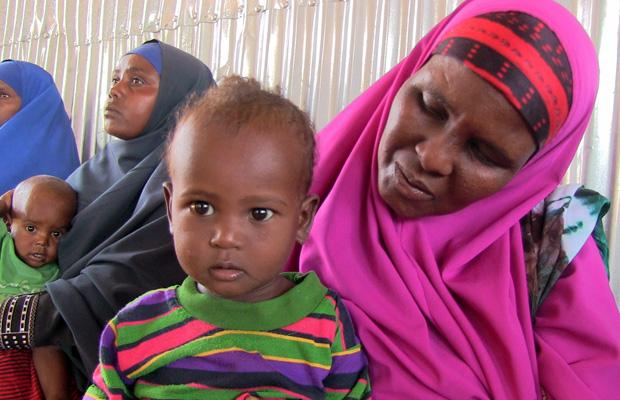 Parts of the region are reeling from three years of failed rains which have left many families short of food, Save the Children’s area representative, Mukhtar Mohumed Hassan, told the Thomson Reuters Foundation.

“People are saying this is the worst drought they have seen in decades,” he said via Skype. “They have not seen a drought on this scale for the last 30 or 40 years.”

Malnutrition-related deaths have been reported in Awdal region, which borders Ethiopia, the United Nations said.

Hospital admissions of children with life-threatening severe acute malnutrition almost doubled in two months, with 33 in March up from 18 in January in Borama Hospital, Hassan said.

Borama is the capital of Awdal region and the second largest city in Somaliland, a breakaway region of Somalia.

“Right now we are fearing starvation,” Save the Children quoted one mother in the hospital as saying. “We have no money to buy food.”

Milk prices have doubled since 2015 to just over $1 per gallon, Hassan said.

Millions of people across the Horn of Africa have been hit by El Nino-related drought, with the largest numbers in neighboring Ethiopia, where 10.2 million need emergency aid.

“Another 1.3 million are on the brink of slipping into a deeper crisis if rains continue to fail and aid is too slow to come,” it said on April 11.

The drought may worsen as predictions for Somalia’s main ‘Gu’ rainy season, from March to June, are poor, it said.

“If that happens, I think the situation will get much worse,” said Hassan. “The remaining livestock will not get food to continue living.”

Among the most vulnerable are thousands of Ethiopians who crossed the border into Awdal, hoping to find water and pasture, only to find an equally difficult situation.

They became stranded in the Oogo Mountains, without food, water or shelter and had to be rescued by locals with trucks, Hassan said.

“They were just walking with their children, some even newborn babies,” said Hassan, who visited the area in March.

The Famine Early Warning Systems Network (FEWSNET) expressed concern about these families in late March, saying they faced an emergency “with few saleable animals and no access to food credit, community support, or humanitarian assistance”.

Most have been transported back to Ethiopia, but thousands more are still trying to make the journey on foot to the border town of Harirad, some 80 km (50 miles) north of Borama in Somaliland, Hassan said.

The president of Somaliland, which broke away from Somalia in 1991 but is not internationally recognized, created a national drought committee in February, composed of ministers, businessmen and religious leaders, tasked with soliciting aid and ensuring it reaches people in need.

All government staff, police and soldiers had 10 per cent deducted from their salaries in February and March to contribute to fundraising, Hassan said.

School children have also been asked to donate.

“In all the schools, they are paying $1 or $2 or whatever they can afford,” Hassan said.

“People are really mobilizing themselves because they think it may take time for aid from the international community to reach them.”