Home frontpage Chase Bank shareholders, foreign interests may have had a hand in reopening 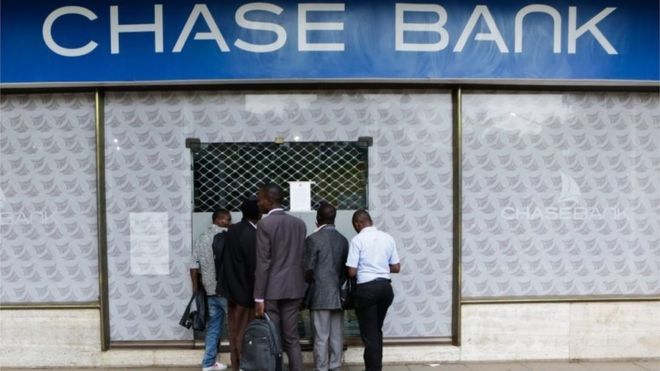 NAIROBI (HAN) April 23, 2016. Public Diplomacy & Regional Security News. By ALLAN OLINGO Chase Bank’s shareholders and a multiplicity of European and African interests could have pushed the Kenyan government to pay it special attention.

Kenya’s President Uhuru Kenyatta was on an official tour in Germany when the bank was placed under receivership two weeks ago. Then, for the first time since the Governor of the Central Bank of Kenya Dr Patrick Njoroge took office, the president spoke about his confidence in the Yale-trained economist.

Speaking in Berlin, President Kenyatta said Dr Njoroge was in order to put struggling banks under receivership to safeguard depositors.

“I am not worried about the banking sector. I support the Governor on this. He is saying we must strengthen and remove the weaknesses in the financial sector. I believe the Governor is doing the best for the sector. The banks must follow the law,” President Uhuru said, adding that he had asked Treasury Cabinet Secretary Henry Rotich to ensure depositors, especially small depositors, were protected.

Interestingly, one of Chase Bank’s shareholders is the German investment fund DEG, which is a subsidiary of KfW — a German government-owned development bank. The placing of Chase Bank under receivership meant that German public funds were at risk. Another German bank, the Deutsche Bank, through its investment fund, had put $8.5 million into the troubled lender, raising the stakes.

President Uhuru’s statement was, therefore, aimed at ensuring that the trip, whose purpose was to attract investors, did not get overshadowed by the receivership news.

Also in the bank were funds from the French government, which had extended an $11.2 million facility to Chase Bank through its agency, Agence Française de Developpement, and several European partners, like the European Investment Bank ($11.8 million), the Comesa-backed PTA Bank ($1.3 million), Switzerland headquartered ResponsAbility ($15.5 million) and the France government-owned Proparco ($40 million).

The liquidation of Chase Bank’s assets would have exposed the country to a diplomatic tiff with the two countries and other development partners, including the African Development Bank.

It is, therefore, no wonder that KCB, in which the Kenyan government has a 17.5 per cent stake, and another government agency the National Social Security Fund of Kenya a 7.62 per cent share, was picked to manage the bank, with a view to taking up the majority share.

KCB chief executive Joshua Oigara, however, said there was no direct intervention by the government for his institution to step in.

“We haven’t had such a conversation with the government about this. Any large bank would have played this role and that’s why there were so many proposals on Chase Bank. As a large lender, we need to offer hope and belief in the system,” said Mr Oigara.