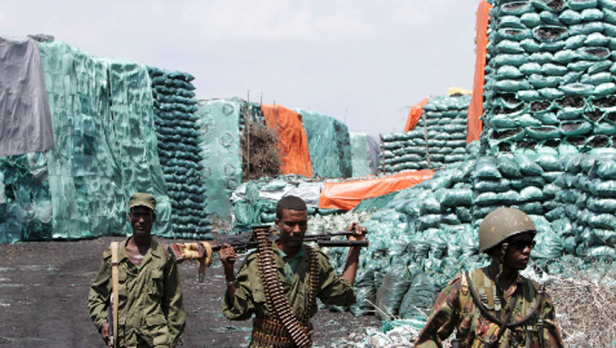 A report from the Somalia and Eritrea Monitoring Group shows that Somalia remains a deeply fractured state, but doesn’t go far enough to suggest how to resolve the country’s underlying challenges.

Over the course of 2017, the Somalia and Eritrea Monitoring Group (SEMG), a subsidiary body to the UN Committee on Somalia and Eritrea, interviewed a broad range of informants to determine the compliance of the Somali government, sub-state actors and international parties with the UN mandates and sanctions related to Somalia. Assessing the country’s prospects for a stable and financially solvent future, the monitoring group identified many areas of concern. These include al-Shabaab’s continued pattern of extortion and service provision, arms trafficking, charcoal smuggling and piracy. Disappointingly, though, the report does not address other transnational crime issues present in Somalia, such as livestock trafficking, sugar smuggling and narcotics.

There has been no significant degradation of the group’s ability to carry out operations despite its having ceded territory since 2011, the report found. Al-Shabaab remains active as a political and military challenger to Somalia’s federal government; the group is capable of carrying out attacks in Somalia and on targets in Kenya.

The terrorist group derives its revenue from a number of sources, but primarily by taxing vehicles and goods through a network of checkpoints, by taxing business and agriculture, and through alms levies. Employing mafia-style tactics, the group enforces tax collection through violence and intimidation. At the same time, al-Shabaab’s domestic revenue generation apparatus is more widespread and systematic than that of the federal government or the state-level authorities. The system is accountable and predictable; they provide receipts and accept payment in Somali shillings, US dollars, or in goods or material. Unlike the state, al-Shabaab does not double-tax people. The group also continues to function as a shadow government in areas that it no longer physically controls, replacing the state as the provider services, including Islamic courts, humanitarian aid and healthcare.

Somalis have responded to nearly 30 years of uncertain governance with an impressive degree of resilience, becoming among the world’s leading microentrepreneurs in an environment that lacks infrastructure and regulation. Many of the most successful business initiatives involve transnational criminal enterprises.

For Somalia watchers, including the SEMG, there are two major areas of concern in terms of transnational crime: the illicit charcoal export trade and trafficking in small arms. Exporting charcoal from Somalia was banned by the UN Security Council in 2012, yet it remains a US$150 million-dollar industry for Dubai-based criminal networks. These groups bribe officials for false certificates of origin, allowing an apparently licit trade in charcoal. Charcoal exports are routed primarily through Iran, where they are falsely designated as Iranian products. Al-Shabaab taxes this illicit trade, reportedly up to 50 per cent of its value (although the SEMG estimates the tax is to be nearer to 25 per cent).

Somalia is also awash with guns and military equipment. The UN lifted its blanket arms embargo in 2012, and the contraband weapons market has since boomed. The SEMG reports that Puntland is the primary entry point for illicit weapons, which originate from Italy (where there is a major arms-trafficking network with Somalia), the US and China. It appears that most of these arms are trafficked by Yemen-based dealers, though other reports have identified Djibouti as the hub of the trade. Even sanction-compliant weapons are entering the illicit arms market: the SEMG interviewed Mogadishu arms dealers, who admitted purchasing government weapons from Somali security forces, including high-ranking officials. In the capital, the typical price for an AK-style assault rifle is between US$1 300 and 1 500 – providing a strong incentive for trading guns in an environment where there is little in the way of oversight measures.

Somali-based pirates also continue to pose a threat to stability in the region, despite a steady decline in pirate attacks since 2012. Puntland remains the centre of pirate activity, a dynamic that, ironically, may now be worsened by a new UN project designed to train and equip a Galmudug State coastguard. Based in the pirate ‘capital’ of Hobyo, an east-coast port, the initiative seems more likely to produce the next generation of pirates than any functional law-enforcement effort, given the questionable oversight and vetting process observed by the SEMG. Securing Somalia’s territorial waters is critical if the country is to protect its licit commerce – reports place the value of goods transported through the Gulf of Aden at US$700 billion a year, and, until now, Somalia has lacked any domestic maritime law enforcement capacity.

The SEMG is circumspect in its recommendations for how to improve the situation in Somalia; most of them revolve around requesting the UN Security Council to encourage cooperation with the monitoring group. It also seeks more support from the government, wryly noting that Somali government officials substantially hindered the group’s fact-finding efforts. Nevertheless, the SEMG offers three actionable recommendations:

While these are commendable suggestions that explicitly address some of the concerns raised by the SEMG’s annual report, they fall short of tackling the key issues that lie at the heart of Somalia’s continued instability: effective service provision for the country’s citizens and good governance. And although the recommendations may be reasonable, implementing them is another question. The first hurdle will be to identify violators of the arms sanctions or the Financing of Terrorism Act. This would need a significant investment in time and investigative resources, a cost that most member states will be reluctant to bear. Secondly, the likelihood that investigations and punitive responses will be administered fairly, and will not become weapons used against political or business rivals, is low given the country’s weak state institutions. And it is unclear whether (and, frankly, unlikely that) consumers of charcoal would be more concerned about the provenance of the charcoal they buy than the cost. It seems more appropriate to work on interdiction and impose price increases to reduce trade in contraband Somali charcoal.

The report fails to address the underlying issue of the absence of governance or make recommendations that would strengthen political institutions in Somalia. This may well be outside the scope of the SEMG’s mission, but it is difficult to see how arms trafficking, terrorism, piracy and charcoal smuggling will diminish without some form of viable law enforcement and justice system in place in a country where historical patterns of clannism, uneven resource distribution and the consolidation of personal fiefdoms continue, despite local and international efforts to create a holistic state. Nor does the report address how regional and international networks and actors capitalize on Somalia’s ‘grey zone’ state to transport illicit goods. For example, media reports suggest illicit sugar is trafficked in huge amounts to Kenya via Kismayo. Iran, the Gulf states, Kenya and Ethiopia all lurk in the subtext of the report, but the analysis would be more compelling had it included a discussion of the regional dynamics.

The SEMG should be praised for doing difficult work in a highly challenging environment and for providing crime researchers with new data about some of the crime dynamics in Somalia. It is unfortunate they do not go further with their recommendations.