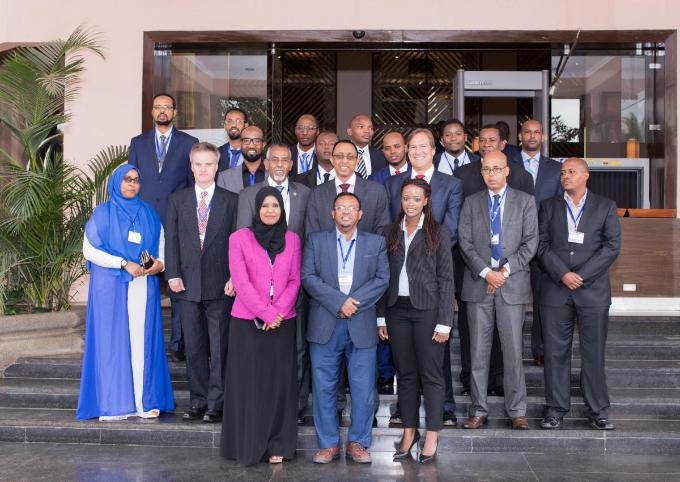 Somalia’s offshore potential oil and gas reserves has garnered the attention of many international oil companies. The potential of these reserves, if managed well, will provide consistent revenue streams that could catalyse the economic development of Somalia.

The Federal Government of Somalia is planning ahead to ensure that it avoids the “resource curse” that has troubled many countries when new resources are discovered. To that end, the Somali government reached out to the African Legal Support Facility (ALSF) for support in preparing its technical ministries for the negotiation of any potential production sharing agreements (PSAs) if oil or gas reserves are discovered.

Working together, the ALSF and Somali government have been working to develop a model production sharing agreement that will be used as the basis for future negotiations. The ALSF also supported the government in developing a toolkit to supplement the model agreements.

The model agreement and toolkit were recently presented at a 3-day capacity-building workshop where government officials underwent training on negotiating Production Sharing Agreements (PSAs) and were presented with the model PSA Agreement and Toolkit.

The workshop was held from August 31 through September 2, 2016, in Nairobi Kenya. The workshop forms part of the ALSF’s ongoing support to the government of Somalia that seeks to increase the awareness and understanding of the processes involved in the negotiation of PSAs, complimenting the ongoing constitutional, legal and regulatory reforms and the consultative process with regional member states with respect to the management of Somalia’s suspected oil and gas reserves. This assistance also compliments the work of other international development partners in preparing the Federal Government of Somalia for anticipated discoveries of oil and gas reserves.

“The training was good and was very important to us as a Ministry because of the new PSA model, which for us is our first time that we had such a model. Now, after the training, we believe that we have gained some knowledge and developed our understanding. It was very essential for us to attend the training because now we believe that we have a team that can go and negotiate using the new PSA model,” said Jamal Mursal, the Permanent Secretary of the Ministry of Petroleum and Mineral Resources.

Through interactive sessions, the participants benefited from an in-depth analysis of the model PSA and took take part in simulated negotiations of the PSA. The participants were also guided through the PSA Toolkit.

Before the workshop, “I thought I am too little for that, my negotiation capacity was small… now I feel like I can lead a team of negotiators,” stated the Upstream Director at the Ministry of Petroleum and Mineral Resources, Abdulkadir A. Hussein.

The training workshop is one of the many interventions undertaken under the ALSF’s capacity-building pillar, which seeks to strengthen and enhance the capacity of African government officials in complex contract negotiations in the infrastructure and extractives sector, and creditor litigation.

The ALSF is committed to supporting African Governments, especially transitioning states, in the negotiation of complex contracts. The annual revenues of the largest international oil companies dwarf the GDP of Somalia. With improved training and support, Somalia is more likely to negotiate a fair and balanced deal that will eventually spur the economic development of Somalia.