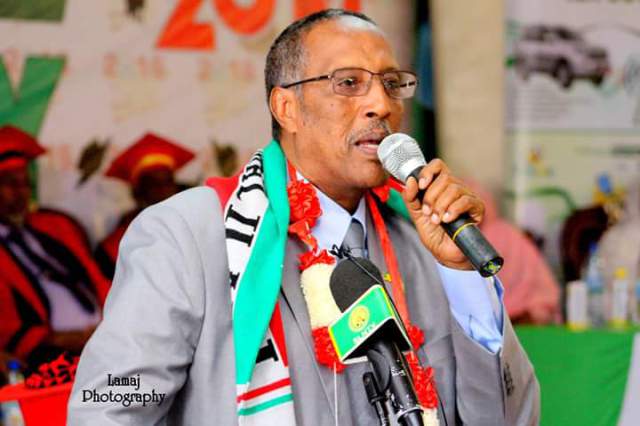 Leadership Suitability in Unstable Horn of Africa: The Case of Somaliland 2017 Presidential Candidates.  BY: Mohammed Dahir Ahmed. In a region where insecurity is the biggest threat to livelihoods, state institutions, economic development, and attraction of foreign direct investment, it is a valid question one to ask himself, who is suitable to lead Somaliland which is peaceful, but locates in volatile Horn of Africa and is also a close neighbor of the Arabian peninsula, where conflict in Yemen and others are increasingly threatening the region.

The right answer is, leadership in such environment requires someone who is well acquainted with the regional security matters. Among the three candidates, Kulmiye presidential candidate, Muse Bihi Abdi is the only candidate who is well conversant with the security, geopolitics and historical undertakings of the Horn of Africa region. He was Somaliland Minister of Interior and security in one of the difficulty periods in Somaliland history, when unruly militia groups  were scattered all over the country. He participated in the militia demobilization, reorientation and rehabilitation. He laid the foundation for Somaliland Police and converted unruly militiaman into  proper police officers keeping the rule of law and protecting citizens and their properties. He was the chairman of the landmark Baligubadle conference in the 1990s where SNM veterans handed over power to the house of elders. He is well conversant in the dynamics of current insecurity in the Horn of Africa and Arabian Peninsula. He is well aware of the ambitions and desires of some groups to thwart Somaliland democracy and harm  not only Somaliland citizens but also adjacent neighboring countries. In the current age of globalization and digital interconnectness,he understands  well how the security of Hargeisa, London,Addisababa and Nairobi are interconnected and how it is important to have close security cooperation. Hence this makes Muse Bihi Abdi a suitable candidate to lead this nation, which is an oasis of stability and peace but locates a volatile horn of Africa. Regional and international leaders who has made change and shown exemplary leadership in their respective communities had the same individual background and leadership characteristics of Muse Bihi Abdi. Late Prime minister, Melas Zenawi of Ethiopia and President of Rwanda Paul kagama were guerrilla fighters like Muse, who liberated their countries and then lifted out from abject poverty millions of their citizens. One of the main reasons they have succeeded to make change in their respective countries is the mere fact that they have led the change and the reform initiative from the top to the regions and districts. In Africa it is had to make changes, economic development and reform institutions unless you do it from the top, in the same ways Paul Kagame and late Melaz Zenawi did.Mere rethotoric, wishful thinking, and poor leadership from the top will not take Somaliland, where that two leaders took their countries with exemplary and strong leadership. That former guerilla leader transformed their countries from an object of international pity into a powerful actor that has commended increasing global attention

On the other hand, Wadani candidate Abdurrahman irro is not fully knowledgeable about Somaliland internal security matters, let alone the security threats in the Horn of Africa and Arabian Peninsula, since he never worked in a security establishment and he was not in the country during the peace building and disarmament process. He did not give effort in security related legislations during his 11 years tenure as the speaker of Somaliland House of Representatives. In addition his experience in security matters is minimal if not zero, which makes him unsuitable to lead a nation which is a neighbor of Southern Somalia and Yemen. He is not sufficiently vigilant in the ambitions and desires of some groups to have a bigger say in his Wadani party policy directions and already he is bowing to their terms and policy recommendations. Abdurrahman Irro is not a man you can count on during difficult times; his leadership is weak, reactive rather than proactive as has been documented during his 11 years tenure as speaker of the House of Representatives.