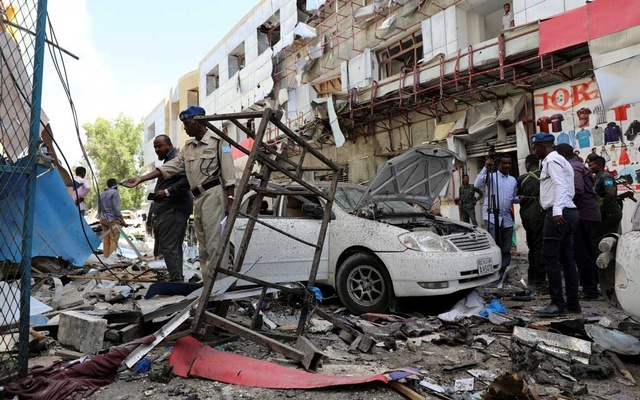 Islamic militants in Somalia have shot dead a senior manager running the port of Bossaso in the semi-autonomous region of Puntland, and a car bomb has killed at least 11 in Mogadishu.

The assassination of Paul Anthony Formosa, a Maltese citizen who worked for the Dubai government-owned P&O Ports, and the bombing in the capital, were both claimed by the extremist group al-Shabaab extremist group.

The killing will be a setback to attempts to attract investment to the unstable, poverty-hit and violent country, and will highlight the continuing threat from the insurgents.

Hours after the shooting in Bossaso, at least 11 people died in a car bomb explosion in the capital.

Capt Mohamed Hussein, a police official, said at least nine people were also injured in the blast on Monday near a mall close to Mogadishu’s local government offices, in the city’s Hamar Weyne district.

Mohamed Hussein Aliye, a 31-year-old shopkeeper, was serving customers when the car exploded.

“It was a normal day for us. I saw the man who parked his car. He was thin and young. After 20 minutes it exploded. I was pushed to the wall. I thought I was dead. Smoke and dark dust shut my sight,” he said.

The attacks came three weeks after a deadly assault by the group on a luxury hotel complex in Nairobi, in neighbouring Kenya.

The US embassy on Monday issued a warning to its citizens about an ongoing threat from Islamic extremists in the east African country.

Yusuf Mohamed, the governor of Puntland’s Bari region, told Reuters news agency that two men disguised as fishermen had shot Formosa as he was going to the port.

He was killed “in the fish market as he was going to Bossaso port this morning. The men armed with pistols hit him [with] several bullets in the head,” Mohamed said.

P&O Ports said an employee had died and three others were injured in an “incident”, without giving further details. The company was cooperating with the Puntland authorities in its investigation, it said in a statement published on Twitter by Dubai’s government media office.

The company paid $336m (£260m) in 2017 for the contract to extend and manage the Bossaso port. The deal was unpopular with some local residents, however, and there were protests.

In a statement claiming responsibility for the attack, al-Shabaab accused the victim of being in Somalia illegally.

Al-Shabaab released a statement through Radio Andalus taking credit for the assassination. The group said it previously issued warnings that the Dubai-based company was “illegally taking Somali natural resources”.

Omar Yasin, a 43-year-old fisherman, was in the market to sell his fish when the shooting took place.

“They were two young men,” Yasin said. “They were in the market since 6am this morning… . One man approached him [Formosa] and shot five times. I saw Formosa heavily bleeding and lying on the ground.

“Soon there was gunfire exchange between the attackers and the security guard. One attacker was shot dead but the other one escaped.”

Al-Shabaab, which is an official affiliate of al-Qaida, has been waging a war for more than a decade to overthrow Somalia’s western-backed central government and install its own rule based on its strict interpretation of Islam’s sharia law.

The organisation is present primarily in rural areas in the south and centre of Somalia, and the north has been considered relatively safe. Middle Eastern powers, Turkey and other countries have engaged in fierce competition for strategic sites and investment on the Somalia coast in recent years.

The US has stepped up airstrikes against al-Shabaab in Somalia since Donald Trump took office, carrying out at least 47 strikes last year. Some have targeted top leaders or key financial officials. Al-Shabaab funds its operations through an extensive network of “taxation” and extortion.

Last year, more than 300 militants were killed in airstrikes launched by US forces. A further attack – the 10th this year – killed 13 al-Shabaab militants, US officials said.

A statement by the US army’s Africa Command said the airstrike targeted al-Shabaab fighters in the vicinity of Gandarshe, Lower Shabelle region, within the war-torn country.

Al-Shabaab has previously used Gandarshe, 30 miles south-west of Mogadishu, as a staging area for attacks including vehicle-borne improvised explosive devices that threaten the capital and its residents, a statement said.

On 15-16 December, six US airstrikes killed 62 al-Shabaab militants near Gandarshe, who were preparing for an attack on a Somali government military base in the region, and a US airstrike killed 24 militants in neighbouring Hiran region on 30 January.

In October, the US said an airstrike killed about 60 fighters near the al-Shabaab-controlled community of Harardhere in Mudug province in central Somalia.

Research by the Mogadishu-based Hiiraan Institute suggests, however, that the organisation has largely adapted to the new threat and that the use of air power alone is likely to be insufficient to defeat the group, which has been fighting to impose an extreme version of Islamic law on Somalia for more than a decade.

Civilian casualties blamed on the US have been a factor in al-Shabaab recruitment.

Experts said one possible motive for the Nairobi attack was to send a strong message that the organisation was still active and capable of long-range terrorist operations, despite a series of US airstrikes that have inflicted heavy casualties.

Al-Shabaab, which is an affiliate of al-Qaida, was responsible for an bloody assault on a mall in the Kenyan capital in 2013. The group has also conducted a series of assaults on military installations in the unstable east African country, though it has sustained significant casualties.

Somalia was recently declared the most corrupt country in the world by Transparency International, the international campaign group.