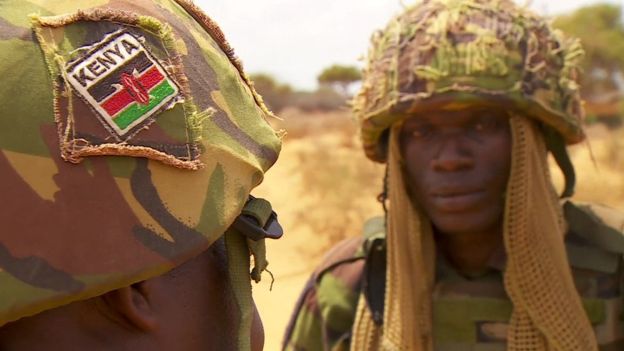 Six hundred members of Jubaland state’s police force have recently graduated, hundreds more will soon go through training and, for the time being, their efforts have brought security to the streets of Kismayo.

The port city in Somalia’s southern-most state has managed to avoid the high-profile suicide car bombings and armed assaults on hotels that the capital, Mogadishu, regularly suffers.

The head of the regional security force is confident they are keeping al-Shabab out of town.

“Jubaland is one of the most peaceful places in Somalia,” says Brig Gen Aden Koojaar, commander of Jubaland Forces (JLF).

“The area controlled by the Jubaland administration is a place where people sleep peacefully day and night, and there’s no problem at all.”

That is something of an exaggeration – high-profile figures and visiting Westerners still need an escort of at least one pick-up truck full of armed men.

And you do not have to go far out of town before al-Shabab clearly has the upper hand.

It is just 40km (25 miles) inland from Kismayo but takes more than two hours crushed in the back of a stifling armoured personnel carrier to reach the village of Abdale Birole.

Bumping along the sandy dirt road, the top gunner scans the low, thorn-scrub forest for movement, and watches the track ahead for any sign of roadside bombs.

Driving recklessly alongside is the JLF – heavily armed and packed into pick-up trucks or “technicals” as they’re known here – far more mobile and streetwise outriders.

Al-Shabab once controlled the whole region, including Kismayo, but this Kenyan army patrol is heading to a village recaptured from the Islamist militants just six weeks before.

The Kenyans are part of the African Union peacekeeping mission in Somalia known as Amisom.

Thousands of troops from Kenya, Ethiopia, Burundi, Djibouti and Uganda are here to help provide military muscle so Somalia can try to build a federal state.

Despite the continuing al-Shabab insurgency and complicated clan politics, voting has finally started in the delayed elections for the lower house.

This is not one person, one vote. “Negotiated democracy” is what they call it.

Across the country around 14,000 delegates selected by clan elders are voting for 275 MPs. A presidential election will follow and an upper house is also being formed.

It has increased the number of people choosing who the lawmakers will be but it has also increased the amount of money each candidate requires to buy enough support for selection.

When the patrol arrives at its destination, the finishing touches are being put to an Amisom military camp on the edge of Abdale Birole.

“The essence of this camp was to establish a forward operating base where we could launch our operations to try and push out al-Shabab,” says Amisom’s Kismayo commander, Lt Col Joseph Kadero.

“If we are able to hand over this position to Somali national forces then we will be able to free our soldiers to move out to liberate more areas.”

And that is a key problem facing Somalia – efforts to build a national army have so far been thwarted by clan politics and mistrust between national and regional leaders.

More than 1,000 national troops are in Kismayo, mostly unarmed and un-deployed because of politics.

It is all very well taking control of towns and territory from al-Shabab but the key challenge is keeping control – and that relies on winning popular support.

“If I tell you about this town, first there is no education,” says a resident of Abdale Birole, Fatuma Mohammed Bashir.

“Secondly there is no water – we have no pumps, people are thirsty. There’s no hospital. And for a settlement anywhere those three things are very important.”

And she is very clear about what would happen if the local or international troops leave – as they have in other parts of Somalia.

“If al-Shabab come back, they will destroy everything – they will kill people, they will slaughter people,” she said.

The reasons thing are going better in the relatively new state of Jubaland is because the regional administration has taken security into its own hands.

Jubaland’s President, Ahmed Mohamed Islam “Madobe”, a former al-Shabab fighter, appears to be proving to be an astute politician by negotiating complex clan agreements to create an effective mixed militia many people feel they can trust.

When civil war tore Somalia apart 25 years ago and the structures of state crumbled, most people retreated into their clans.

Breaking down those barriers at forming an inclusive functioning federal state is the key to Somalia’s success.

But it is going to be a long process.